Occurrence of the Sabretooth

The saber-toothed cat Smilodon populator, typical of the Pleistocene of South America, is known for its teeth, cranial bones, and post-cranial bones (humerus, radius, ulna, femur, tibia, fibula, astragalus, and phalanges). A specimen found in the Cuvieri Cave in Brazil based on small bones (calcaneal, ectocuneiform, and phalanges) is described and commented here. The osteological material has a complete calcaneal and an ectocuneiform that adds data on S. populator. The specimen is comparable in size to that of an adult lioness and represented the largest predator in the region. The associated fauna and age obtained for the material were also discussed.

Copyright: May 2020 Society of Vertebrate Paleontology.
This is an open access article distributed under the terms of the Creative Commons Attribution License, which permits unrestricted use, distribution, and reproduction in any medium, provided the original author and source are credited.
creativecommons.org/licenses/by/4.0

The Cuvieri cave is part of the Lagoa Santa karst complex, consisting of two passages, one obstructed and the other with 1.5 m height and 1 m width, giving access to its interior. The cave has three small vertical cavities, natural traps, which were called Locus 1, 2, and 3, with 16 m, 4 m, and 8 m depth, respectively (Hubbe et al., 2011). Since 1974, with the discovery of terrestrial sloth Catonyx cuvieri, the Cuvieri Cave has been the target of scientific interest which is reflected in the work done on dating, paleontology, taphonomy, and comparison with other paleontological and archaeological sites (Hubbe et al., 2011; Haddad-Martim et al., 2017).

The Felidae family emerged in South America since the American Faunal Interchange of the Late Pliocene. Currently only three genera occur in South America, Puma, Panthera, and Leopardus. However, after the faunal exchange three other genera attributed to the Machairodontinae subfamily were reported, Smilodon, Homotherium (Mones and Rinderknecht, 2004), and Xenosmilus (Rincón et al., 2011), the first being the most common in the fossil record.

The genus Smilodon is part of the Machairodontinae, an extinct subfamily of Felidae, and includes three species; S. gracilis, S. fatalis, and S. populator. The main diagnostic feature of this subfamily is the very elongated canine teeth compared to other predators, from which its colloquial name “saber tooth cats” originates. The Smilodon populator species is, so far, the largest and the last to be extinct (Antón, 2013; Christiansen and Harris, 2005; Chimento et al., 2019).

Remains of Smilodon populator have been registered in almost all countries in South America (Berta, 1985, Kurtén and Werdelin, 1990; Ubilla et al., 2004; Rincón, 2006; Prieto et al., 2010). Studies developed by Hubbe et al. (2011) named the presence of a large Felidae, initially identified as Smilodon populator. The purpose of this contribution is the presentation with comments on the osteological material of this specimen and its identification. 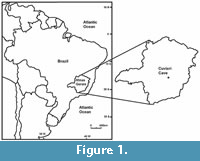 The osteological material of the Cuvieri Cave (Figure 1) collected comes from “Locus” 2. According to Hubbe et al. (2011) the sediment found in this location was poorly consolidated, which favored excavation and more careful exploration, with detailed stratigraphy and taphonomy data being obtained.

The specimen presented a small number of materials for study, identification, and classification. According to Hubbe et al. (2011) the distribution of these bones was more concentrated in the corners and extremities of “Locus” 2, despite this scattering bone parts can be considered as belonging to the same individual, since they are compatible in size to those of a large feline, and there are no repeated bone parts. The specimen is represented by only 11 bone parts that were scattered throughout the cavity. An ectocuneiform bone, CVL2-13122, was dated and was 10790 ± 60 BP at 14C yr BP and 12.880 - 12.720 cal yr BP.

The material and registration numbers are deposited at the Laboratório de Estudos Evolutivos Humanos (LEEH) of the Universidade de São Paulo.

General characteristics and comparison. It is possible to compare the osteological material found with large species attributed to the genus Panthera. In Figure 2, Figure 3, and Figure 4 the calcaneal and ectocuneiform bones were compared to the equivalents of an adult lioness (Panthera leo).

Calcaneal. Comparing the calcaneal, the specimen found in the Cuvieri Cave has the most robust and dense tuberosity (tuber calcis), and the astragalar facets are larger, wider and slightly closer to the cuboid rim than in that of the lioness. 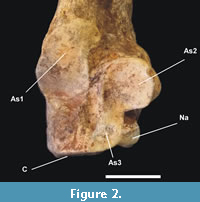 The sustentacular facets, As2 and As3 (Figure 2), have great contact with each other, and As3 basically represents an extension of As2. Compared to the genus Panthera, it has a small extension that links these facets (Figure 3A-D). The process supporting the second facet (As2) or support is more robust and prominent in proportion to the total size of the calcaneal, mainly seen in dorsal view (Figure 3). 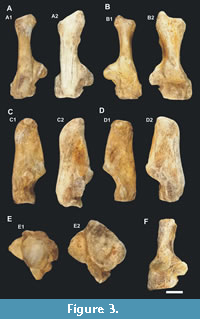 The As3 astragalar facet is larger and more evident than in the lioness and extends to the cuboid facet. The navicular facet (Na) is next to the As3 facet and both are in direct contact with the cuboid articular facet.

The ectal facet (As1) is larger, wider, and less elongated than observed in the genus Panthera and does not invade the tuberosity.

The cuboid facet (C) differs from the lioness since it occupies a larger area, reaching the plantar border, being straight and flat on this side to the central part (Figure 3E), but presents a concavity close to the contact with the navicular facets (Na) and of the astragalar facet (As3).

Ectocuneiform. The right ectocuneiform is more compressed in proximo-distal direction than those in recent large felines. The plantar projection with groove to the tendon of the long fibular muscle has an open hook shape and less prominent curvature than that of the lioness (Figure 4C-D). 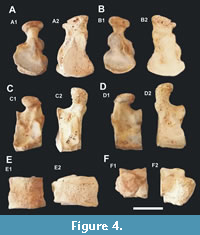 The articulating facet with the navicular tapers and stretches to the plantar region, while observing a small projection on the lioness (Figure 4B).

The opposite facet, which articulates to the metatarsal III, is very similar in both (Figure 4A). The plantar projection of this surface is much shorter and relatively small compared to that of a lion of similar size (Figure 4C-E).

Viewed from the inside, the plantar facet of the second metatarsal spans the distal border near the dorsal part of the ectocuneiform. On the outer surface, the cuboid facet is larger than that of the lioness and extends along the proximal edge and approaches the dorsal edge.

The main measurements performed are available in Table 1. 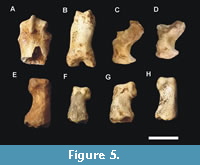 Discussion. Smilodon populator was considered to be the sole representative of the genus Smilodon in South America until evidence was found in the Andean region of Ecuador and Peru, and recently in Uruguay of S. fatalis (Kurten and Werdelin, 1990; Manzuetti et al. 2018) and S. gracilis in the Venezuelan Andes (Rincón et al, 2011). Manzuetti et al. (op. cit.) suggested that S. populator and S. fatalis lived together at the same time and region and Christiansen and Harris (2005) commented that although S. populator is larger, it is not uncommon to find adult individuals of similar size to S. fatalis.

Comparing the ectocuneiform and calcaneal sizes it is possible to infer that the specimen is close to the Pleistocene felines Smilodon fatalis, S. populator and Panthera gombaszogensis, and P. onca augusta (Merriam and Stock, 1932; Hemmer et al., 2010, Argant and Argant, 2011; Baryshnikov, 2011; Scaferla et al., 2013) in length and width and smaller than that of large extinct felines such as P. atrox and P. fossilis (Merriam and Stock, 1932; Sabol, 2014; Chimento and Agnolin, 2017).

The proportions of left calcaneal and right ectocuneiform width and length measurements of the Cuvieri Cave specimen with those described for S. fatalis, by La Brea by Merriam and Stock (1932), the Brazilian specimen is slightly more robust than would be expected for a S. populator of similar size to S. fatalis.

Smilodon populator occurrences are common in southeastern Brazil. Lund (1842) originally identified and described this species in the Lagoa Santa region, where several specimens were found in various caves, including phalanges and large canine teeth. Other specimens were dated and described, being the specimen found in the Abismo Iguatemi Cave, State of São Paulo, which presented the best specimen with the skull and several preserved bone parts (Ferreira and Karmann, 2002; Castro and Langer, 2008, 2011; Hubbe et al., 2013), revealing important information about the species.

The existence of several specimens of Smilodon populator allowed the registration of various ages for several specimens in South America, and it is clear that the specimens occurred during the late Pleistocene, especially in the last 100,000 years from the Pleistocene to the Early Holocene. Most of the reported ages ranged from 25,000-9,000 years (Berta, 1985; Kurtén and Werdelin, 1990; Hubbe et al., 2013; Prevosti and Martin, 2013; Prevosti et al., 2013; Bocherens et al., 2016), with one exception coming from northeast Brazil dating from 93,900 years, using the ESR method, being the oldest of this species (Kinoshita et al., 2017).

The osteological material was found next to several carcasses of Cervidae, but none of them has predatory activity marks by large animals, and only rodent or small carnivorous marks, such as Canidae Cerdocyon, were observed. The same was found in other parts of the Cuvieri Cave. Probably the whole animal was there at some point and because of the period of exposure or fragmentation by other animals that subsequently fell there (pigs and deer), most of the bones that persisted are small or massive (calcaneal and phalanges), which are easily buried or protected, while bones with a larger surface area (femur, humerus, and scapula) and fragile bones (vertebrae and cranial bones) have been destroyed. Prevosti and Vizcaino (2006) suggest that Smilodon populator was at the top of the food web and could have captured an animal of 1 ton. All associated animals found would be potential prey.

The Cuvieri Cave was not used as a refuge for food or housing, as there was no evidence of gathering or hunting activity and the cavity probably served as a trap. Remains of Smilodon populator have been documented in Venezuela, Brazil, Paraguay, Uruguay, Argentina, Bolivia, and Chile. The age obtained by Hubbe et al. (2011) is very close to those measured in Chilean Patagonian specimens (Pietro et al., 2010), which are among the most recent of this species, in the Pleistocene-Holocene boundary.

Smilodon populator is the only species of Smilodon reported in Brazil, but with the discovery of Smilodon fatalis in Uruguay the hypothesis that both coexisted should not be disregarded. The specimen found is similar in size to that of a S. fatalis but is more robust. It would be in accordance with the proportions of a medium to small S. populator.

The author thanks M.A. Aragão for support. The author also thanks Dr. M. Mercedes Martinez Okumura responsible for LEEH (Laboratory for Human Evolutionary Studies), Department of Genetics and Evolutionary Biology, Institute of Biosciences of the University of São Paulo which allowed the preparation of fossils in her laboratory.

Berta, A. 1985. The status of Smilodon in North and South America. Contributions in Science, Natural History Museum of Los Angeles County, 370:1-15.

Prevosti, F.J. and Vizcaíno, S.F. 2006. Paleoecology of the large carnivore guild from the late Pleistocene of Argentina. Acta Palaeontologica Polonica, 51:407-422.