The last overview of Cenozoic localities with records of freshwater gastropods was provided more than 80 years ago. Since then, a wealth of new information has been published: new localities have been discovered and fundamental changes occurred in regional stratigraphy. In addition, many localities are still attributed to erroneous or outdated stratigraphical concepts even in recent papers. Geopolitical evolution of Europe has, furthermore, led to name changes and confusion regarding the exact origin of samples in collections. Here we provide a fully georeferenced dataset for almost all published Miocene and Pliocene freshwater gastropod localities (2,930), including updated stratigraphic data where possible. This basic update will serve as an essential fundament for any future work related to the freshwater deposits and respective faunas in general.

In 2013 a new project was launched devoted to the statistical assessment and evaluation of Europe's freshwater gastropod faunas during the Neogene (FreshGEN, Neubauer et al., 2014, 2015). In order to allow accurate geographic comparisons of coeval faunas a sound stratigraphy is indispensable. Despite great effort of experts for regional stratigraphy, however, many errors and misclassifications are still found even in modern publications. This involves classical problems like confusion of stratigraphic concepts or controversially discussed correlations of regional stratigraphic units to the international geological timescale. A common example for the first case is the erroneous correlation between the Tortonian of the Mediterranean and the actually much older Badenian (Langhian to Early Serravallian) strata in Paratethys area erroneously attributed to the Tortonian as well (Papp et al., 1978). An example for the latter case is the correlations of the “Paludina beds” (Krstić, 2003; Krstić and Knežević, 2003; Nenadić et al., 2011; Krstić et al., 2012) in Croatian, Hungary, and Serbia and its Romanian counterparts in the Dacian Basin (Lubenescu and Zazuleac, 1985; Papaianopol et al., 2003; Stoica et al., 2007, 2013; Lubenescu and Lubenescu, 2008) or the southern German Kirchberg Formation (Schlickum, 1964, 1966, 1970a, 1970b; Zöbelein, 1983, 1994; Reichenbacher et al., 1998a, 1998b, 2004, 2013; Kowalke and Reichenbacher, 2005) and Silvana beds (Gall, 1972; Schlickum, 1976; Zöbelein, 1985) to the international timescale. Here we present the latest update of the stratigraphic ages as derived from the most recent literature available. In many cases this involves two steps, i.e., the integration of a locality's deposits in a regional framework and the correlation of the latter to the international Geological Time Scale, hence, absolute ages. Especially for cases where information is still wanting or imprecise or for those entirely based on uncertain faunal records, some age attributions certainly will be still incorrect. Therefore, we welcome any feedback by experts for regional stratigraphy to improve this framework, which can be used as basis for future biodiversity analyses. This dataset will not only be relevant for malacologists but will be an essential basis for any work related to the freshwater deposits and respective faunas in general.

A detailed literature review underlies the present work, with data deriving from 569 publications in total. The localities were gathered from 408 of these works (see supplementary online material). For stratigraphical information 412 publications were used. Several online sources were used for the georeferencing, where information was wanting in the original publications, i.e., Google™ Maps (maps.google.com), GeoNames geographical database (www.geonames.org), Google™ Earth 7 software (version 7.1.2.2041), and OpenStreetMap (www.openstreetmap.org/). Additionally consulted offline sources are the lexicon of villages in the Habsburg monarchy (Raffelsperger, 1845-1853) and numerous geological and geographical maps stored in the library of the Geological-Paleontological Department of the Natural History Museum Vienna. Although the general geographic frame is Europe we also integrated Turkey and marginal territories of Azerbaijan, Georgia, and Kazakhstan, because these regions harbor closely related gastropod faunas and the palaeogeographic units studied do not end at the political boundaries of modern Europe. 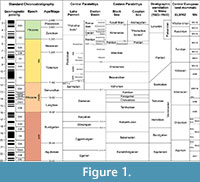 The comprehensive list covers a total of 2,930 entries and is considered to include almost all known localities of the European Neogene, which encompasses a defined time interval of 23.03-2.588 Ma (Gradstein et al., 2012). All except 27 (< 1%) are fully georeferenced. The latter localities could not be unambiguously matched with modern geographic terms listed in the consulted online and offline sources. For some many possible candidates exist; others, in contrast, are absent from all modern sources. Neither could the exact geographic position of these localities be figured out by re-checking the original publications first mentioning them, due to the lack of precise information.

Figure 2 shows all the localities with geographical data. This map, however, clearly reveals underrepresented areas. North of ca. 52° latitude surface deposits are of Late Pliocene age or younger. Apart from subsurface strata (e.g., documented in mines and boreholes), older deposits at higher latitudes were eroded during the Ice Ages. Moreover, data from Eastern Europe is scarce, largely resulting from the lack of sediments of that age, but certainly also from the inaccessibility of regional literature.

The dataset provided as Microsoft Excel 97-2003 file (.xls) gives information about geography and stratigraphy of the Neogene localities. To ease usage of the data a Keyhole Markup Language file (.kml) is provided which allows rapid visualization of the data in many GIS systems, including Google™ Earth and ESRI® ArcGIS™. The icons in these files are color-coded according to the age of the locality, in order to provide a first impression of the age distribution of the European freshwater gastropod fossil record.

In the following each field is explained in detail:

ID. Identification number of record as used in the database.

Locality. Name of the locality (occasionally with indication of sample). For records where precise data is unavailable this is equal to the name of the parent administrative unit.

Country. Provides information to which country the locality belongs at present.

Alternate spellings. Disused names of the locality and common misspellings found in the literature. Sometimes this involves many different notations, depending on the presence of diacritic marks and/or hyphenations or shifting political affiliations in the past.

Stratigraphic age. Age of a locality, occasionally with indication of a lithostratigraphic unit or biozone. For some ambiguous terms the respective geographic realm was stated, since the absolute ages may diverge in different paleogeographic settings (e.g., Sarmatian in the Central vs. Eastern Paratethys). For localities where no updated information was available the most probable stratigraphic attribution was derived from the faunal inventory as determined by the present FreshGEN project team. Mind that the given ages for the localities only refer to layers bearing the recorded freshwater gastropods, hence lacustrine, fluviatile, or marginal marine settings with faunal elements washed in. The total stratigraphic range covered by a locality's deposits might thus be larger.

Age, upper boundary. Absolute age of upper boundary. Both lower and upper values might deviate from the real stratigraphic range, but rather indicate maximum and minimum possible boundaries.

Reference. Full literature reference for the stratigraphical information. In some cases the age classification given in the respective publication has been updated in accordance with current knowledge (e.g., “Tortonian” in the Paratethys area was changed to Badenian).

Stoica, M., Lazăr, I., Vasiliev, I., and Krijgsman, W. 2007. Mollusc assemblages of the Pontian and Dacian deposits from the Topolog-Argeş area (southern Carpathian foredeep - Romania). Geobios, 40:391-405.