Helius (Helius) qinghai n. sp. belongs to the one of the best studied genera of the Diptera in terms of its history, with 23 fossil species described to date. The new species described in this paper is the first representative of the family Limoniidae (Diptera) from the little known and newly discovered locality Caergen Village from eastern Qinghai Province, northeastern Tibetan Plateau (China). The age range of fossils at Caergen Village of the Garang Formation is late Early Miocene to early Middle Miocene (16-19 Ma). This finding contributes to our knowledge of the evolution of the genus Helius. A summary about fossil records of the genus Helius is presented in the paper.

Copyright: January 2019 Paleontological Society.
This is an open access article distributed under the terms of the Creative Commons Attribution License, which permits unrestricted use, distribution, and reproduction in any medium, provided the original author and source are credited.
creativecommons.org/licenses/by/4.0/

Limoniid flies of the genus Helius Lepeletier and Serville, 1828, are characterized by a significantly elongated rostrum reaching almost body length in some species; all species have also a characteristic wing venation. Evolution of this genus is one of the best documented among the Diptera; 23 fossil species described to date (Table 1) cover the entire period of the genus’ evolution since the Lower Cretaceous to the Lower Miocene - more than 130 million years (Kania et al., 2016). The first two fossil representatives were described by Loew (1850) from Eocene Baltic amber. The oldest members of the genus were found recently in Lebanon amber from the Lower Cretaceous (Kania et al., 2013; Krzemiński et al., 2014). From the Cretaceous three more species were described: in Burmese amber from mid-Cretaceous (Ribeiro, 2002), from the Upper Cretaceous of Botswana (Rayner and Waters, 1990) and from Cretaceous amber of Alava (Spain) (Kania et al., 2016). However, majority of fossil Helius species were described from Eocene Baltic amber (Loew, 1850; Meunier, 1906; Alexander, 1931; Krzemiński, 1985, 1993; Kania et al., 2013; Krzemiński et al., 2014; Kania, 2014). From the Oligocene, two species are known from Europe (Statz, 1944), one from North America (Krzemiński, 1991) and three in Miocene Dominican and Mexican ambers from Central America (Podenas, 2002; Podenas and Poinar, 2001, 2012; Kopeć et al., 2016). Krzemiński (2002) described three other species from the Middle Miocene of Caucasus, H. stavropolensis, H. miocenicus and H. erticillis. Recently, more than 200 species of Helius occur on all continents except Antarctica (Oosterbroek, 2016).

In a little-known locality aged at the Lower Miocene of northeastern Tibetan Plateau (China), an assemblage of fossil plants and insects was discovered. The fossil described in this paper was collected from the Guide Group at Caergen Village, Duohemao Town, Zeku County, eastern Qinghai Province, Northwest China (34°56ʹN, 101°48ʹE, 3700 m a.s.l.) (Li Y. et al., 2016; Li X. et al., 2016). The Guide Group constitutes a lacustrine-fluvial sedimentary terrain and is mainly concentrated in the basins of eastern Qinghai Province: Xining-Minhe, Tongde，Guide-Hualong and Caergen (Guo, 1980, Fang et al., 2005). The outcrop is divided into five formations: the Ganjia Formation (2.6-3.6 Ma; Fang et al., 2005), the Herjia Formation (3.6-7.8 Ma), the Ashigong Formation (7.8 to >11.5 Ma), the Garang Formation (<16-19 Ma) and the Guidemen Formation (19-20.8 Ma). The exposed oil shale beds of the section belonging to the Garang Formation yield abundant, exquisitely preserved plants fossil (Guo, 1980), palynological fossils (Sun et al., 1984) and mammalian fossils (Qiu, 1981a, b). Insect fossils were collected from the Garang Formation and include Hemiptera, Hymenoptera, Mecoptera, Odonata and Diptera. The age range of fossils at Caergen Village is the late Early Miocene to early Middle Miocene, < 16-19 Ma. More details about geological settings are available in Li Y. et al. (2016) and Li X. et al. (2016). To date at this locality only three specimens of crane flies have been found, two from the family Tipulidae and one to the genus Helius from the Limoniidae.

The new fossil species of the genus Helius from this newly discovered locality is described here; this finding contributes to our knowledge of the evolution of the genus. 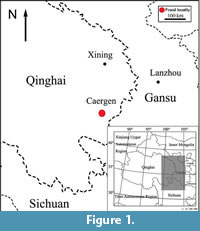 The study was based on specimen No. CNU-DIP-QZ2017001 from the Guide Group at Caergen Village, Duohemao Town, Zeku County, eastern Qinghai Province, North-west China from early Miocene (Figure 1-Figure 2), one and the only representative of genus Helius (Limoniidae) was found in this locality. Holotype is housed in the collection of the Key Laboratory of Insects Evolution and Environment Changes, College of Life Sciences, Capital Normal University, Beijing, China. 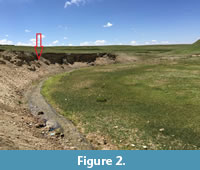 The specimen was studied using a Motic SMZ-168 stereomicroscope equipped with a Leica DFC 500 digital camera. The measurements were taken with NIS-Elements D 3.0 software. Line drawings were prepared with Adobe Illustrator CC and Adobe Photoshop Elements 5.0 graphics software. The length of d-cells was measured from the hind edge of d-cells to the connection of cross-vein m-m with vein M3. The drawings for the analysis were based on the specimen and photographs. Wing venation nomenclature follows Krzemińska et al. (2009). 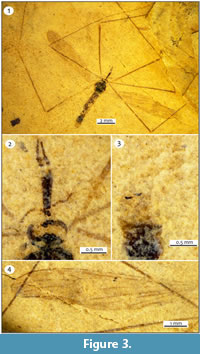 Etymology. The species name is derived from the name of the province where specimen was found.

Diagnosis. Last segment of palpus slightly shorter than all remaining segments combined together; rostrum only slightly longer than palpus; antenna almost twice as long as rostrum and two and a half times as long as head; vein R2+3+4 is almost twice longer than vein Rs; d-cell is as long as 1/7 of wing; hypopygium with short and broad gonocoxite, outer gonostylus strongly sclerotized, short, broad at base and gradually narrowing to distal part; inner gonostylus as long as outer one, lobe-shape. 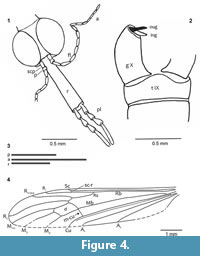 The oldest representative of genus Helius (Limoniidae) is known from the Lebanese amber aged Lower Cretaceous (Krzemiński et al., 2014; Kania et al., 2016). The most obvious evolutionary trend in morphology of the genus Helius concerned the mouthparts (Kania, 2014; Kania et al., 2016). Rostrum of these flies underwent a strong transformation in result of co-evolution with angiosperms, which evolved at the same time. The concept that genus Helius appeared and evolved most probably on the area of Gondwana is supported by the evidence of the two oldest species preserved in Lebanese amber (Kania et al., 2013; Krzemiński et al., 2014) and one from the Upper Cretaceous of Botswana (Rayner and Waters, 1990). These three taxa illustrate evolutionary trends, which dominate in further evolution of genus; H. lebanensis Kania, Krzemiński and Azar is characterized by rostrum only slightly exceeding the head width, while the rostrum of the second species of the same age, H. ewa Krzemiński, Kania and Azar, is few times longer than width of the head, and reaches ca. 1/3 body length. Comparative head morphology of the already described fossil species from the genus Helius was discussed in Krzemiński et al. (2014) and Kania et al. (2016).

Evolution of the genus Helius was closely connected with the radiation and expansion of angiosperms, and its representatives were known from all geological periods since the Lower Cretaceous on different continents. Well documented diversity in the rostrum among the Cretaceous representatives of Helius indicates a high evolutionary potential and rapid evolution of flies of this taxon (Ribeiro, 2002; Kania, 2014; Krzemiński et al., 2014; Kania et al., 2016).

An investigated specimen, which is one of the youngest impressed fossil representative of the genus (Table 1), was found in the little studied locality from the Guide Group at Caergen Village, Duohemao Town, Zeku County, eastern Qinghai Province, North-west China from early Miocene. Investigations of fossil flora and insects from the family Cixiidae (Hemiptera) from this locality (Guo, 1980; Li Y. et al., 2016) support the concept that the local paleoclimate in the Early Miocene was warm-temperate, mild and arid, and the area was overgrown by wood and shrubs.

The newly described species, Helius qinghai sp. nov., is large; its wings reach almost 8 mm. Wings of other fossil congeners are 2.5-7 mm long, while those of most recent taxa are not longer than 10 mm. Ratios of the length of rostrum, antenna and palpi characteristic for a new species resemble slightly those of H. oosterbroeki Kopeć, Kania and Krzemiński, 2016 described from Dominican amber (Lower Miocene). However, the latter species is half as large, with wings only 4 mm long, and comes from a different region of the world. Moreover, these two species differ in wing venation and male genitalia (Kopeć et al., 2016). Therefore, this similarity in proportion of mouthparts of H. qinghai and H. oosterbroeki is considered to be incidental. The differences from the remaining fossil congeners of H. (H.) qinghai sp. nov. are significant and based mostly on differences in proportion of antenna, palpi and rostrum as well in wings venation and male hypopygium. The finding of the new and one of the youngest representatives of genus Helius enriches our knowledge about the evolution of this genus.

This research was supported by the National Natural Science Foundation of China (Nos. 31730087 and 41688103), Program for Changjiang Scholars and Innovative Research Team in University (IRT-17R75) and financially supported by the University of Łódź. We are grateful to E. Krzemińska for English correction of the first version of the manuscript.

Krzemiński, W. 1985. Limoniidae (Diptera Nematocera) from Baltic amber (in the collection of the Museum of the Earth in Warsaw). Part I. Subfamily Limoniinae. Prace Muzeum Ziemi, 37:113-117.