A new species - Dactylolabis (Idiolabis) ryszardi n. sp. from Eocene Baltic amber is described. It is the third species of this extinct subgenus to be described and is known exclusively from Eocene Baltic amber. The distinctive features of the newly described species are the character of wing venation, especially the shape of discal cell, characteristically indented in upper distal corner by the position of dM1+2 shifted to 1/3 of d-cell, and the morphology of the hypopygium. A parsimony analysis of type species of extant taxa and extinct species of the genus Dactylolabis from Baltic amber is provided based on 25 morphological characters. The analysis confirms the status of extinct subgenera from the Eocene Baltic amber currently recognized within the genus Dactylolabis and shows the modern and fossil taxa grouped separately.

The Dactylolabinae is a small subfamily comprising 65 species in the genus Dactylolabis Osten Sacken, 1860, divided into four subgenera. The group was revised by Alexander (1920) largely on the basis of characters of their larvae. Later features of the subfamily were discussed by Starý (1992), concluding the group was the most primitive offshot of Limoniidae. Only four extant subgenera were described among the single genus of this subfamily, Bothrophorus Savchenko and Plyushtch, 1984 (1 species), Coenolabis Savchenko, 1969 (4 species), Dactylolabis Osten Sacken, 1860 (58 species) and Eudactylolabis Alexander, 1950 (2 species).

Fossil representatives of Dactylolabinae are rare. The first five fossil species attributed to Dactylolabis were described from Baltic amber by Meunier (1906a, 1906b). According to Alexander (1931), none of these species belongs to this genus. The fossil Dactylolabinae are classified in Dactylolabis s.str. (2 species), plus the extinct subgenera Aurolabis Podenas, 2003a (1 species), Eobothrophorus Podenas, 2003a (4 species), Eolabis Podenas, 2003a (5 species), and Idiolabis Alexander, 1931, exclusively from the Eocene Baltic amber (2 species) (Alexander, 1931; Krzemiński, 2000a). One species - Dactylolabis tenuis Statz, 1944 - was described from sedimentary rocks (Rott, Miocene of Germany; Statz, 1944) and remains unplaced in any subgenus.

The present study was based on a specimen from the collections of the Institute of Systematic and Evolution of Animals, Polish Academy of Sciences (ISEA PAS). The specimen was studied using a Nikon SMZ 1500 stereomicroscope. The photographs to analyze were taken with a Nikon DS-Fi1 camera equipped with a microscope. The drawings were made on the basis of the specimen and photographs. The measurements of the specimen were taken with NIS-Elements D 3.0 software. The nomenclature of wing venation follows Krzemiński et al. (2010) and terminology of male genitalia follows Podenas (2003a).

Placement of this species within the Dactylolabis reported from Eocene Baltic amber was tested with the use of Maximum Parsimony (MP) criterion, implemented in TNT software package, with the ‘New Technology Search’ (Goloboff et al., 2008). The type species of extant Dactylolabis subgenera not yet reported as fossils were also included in the analysis. L imnophi l a pictipennis (Meigen, 1818) - type species of the genus Limnophila Macquart, 1834 was selected as the outgroup as Limnophilinae are closely related to Dactylolabinae (Ribeiro, 2008). The morphological data for the matrix were compiled into Nexus file using Mesquite v. 3.01 (Maddison and Maddison, 2014). All 25 characters were treated as unordered and unweighted (Table). Unambiguous characters were mapped and analyzed using WinClada 1.00.08, under fast optimization (Nixon, 2002). Tree file received were adjusted using Corel Draw X3 and Photo-Paint software. 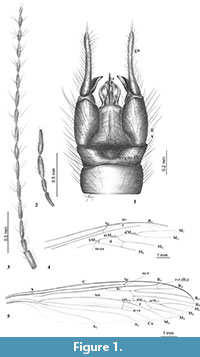 Diagnosis. Vein Sc ending before the fork of Rs into R2+3+4 and R5; discal cell comparatively small, characteristically indented in upper distal corner by the position of dM1+2 shifted to 1/3 of d cell. Cross-vein m-cu before fork of Mb into M1+2 and M3+4. Tergite IX without process, indented in the middle. Gonocoxite elongated, narrow basally; gonostyle very elongated, very tiny with short, wide, distinctly crenate process at base.

Head: antenna (Figure 1.3, Figure 2.2) 16-segmented, if bent backwards, it would reach the base of abdomen; scape long, cylindrical; pedicel not very elongated, rather cylindrical; flagellomeres elongated with several, usually four, setae (verticils) on each flagellomere equal or longer than the segments bearing them; apical flagellomere approximately half as long as penultimate one and widened in distal part with four elongated setae at apex; palpus (Figure 1.2, Figure 3.1) 0.88 mm long, with the last segment as long as the penultimate one. 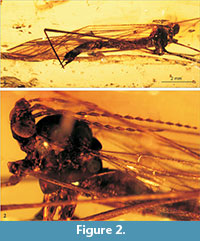 The strict consensus tree revealed two main clades - clade B: [Bothrophorus monstrosa + Coenolabis aberrans + Dactylolabis montana + Eudactylolabis damula] comprising representatives of extant subgenera and second clade - clade C, comprising species of extinct subgenera with exception of above mentioned two fossils from Baltic amber, placed originally in nominative subgenus Dactylolabis, but with relationships unresolved by the present analysis. Majority rule (cut off at 50) tree presents three clades, clade A: [Dactylolabis amberifiis + Dactylolabis viduus] supported by homoplasy, very light stigma, present also in clade comprising species of the genus Eolabis. Separation of this group from modern Dactylolabis montana could be due to missing data for the fossils. Clade B is partly solved: [Coenolabis aberrans + Dactylolabis montana + [Bothrophorus monstrosa + Eudactylolabis damula]] and supported by two synapomorphies - compound eyes occupying more than half of lateral surface of head and presence of two tibial spurs. In the strict consensus tree clade B is supported by in addition by homoplastic feature - enlarged thorax. Clade [Bothrophorus monstrosa + Eudactylolabis damula] in the majority rule tree is supported by homoplasy, not produced gonocoxite, shared with majority of known fossils from Baltic amber. 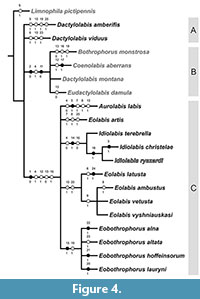 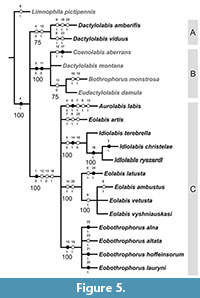 The results of the analysis presented above confirmed the status of extinct subgenera from the Eocene Baltic amber currently recognized within the genus Dactylolabis. Interestingly, the modern and fossil taxa are grouped separately. The female characters of the Da c tylolab i s subgenera and species are too weakly known and not available for inclusion in our analysis. However, the subgenus Idiolabis is characteristic of ovipositor elongate, with tergal valves up curved, and base of IXth abdominal segment subtended by a pair of fleshy lobes, which could be interpreted as autapomorphies of this taxon. Among the subgenera of Dactylolabis the structure of ovipositor seems to be differentiated, cercus could be elongated, exceeding length of valve (subgenus Dactylolabis), cercus wide, and very short valve, tip of which just slightly reaches beyond the base of cercus (Coenolabis) or ovipositor could be relatively long and stout, the tips of the tergal valves subobtuse (Eolabis). It is unfortunate that the female characters and their disparity are too weakly recognized to be included in the present analysis.

The genus Dactylolabis Osten Sacken, 1860 comprises diversified taxa, grouped in eight subgenera, of which four are completely extinct. Only two species of recent subgenus Dactylolabis are known from Baltic amber inclusions, however, in the present analysis these species are segregated from modern species. The modern representatives of the genus Dactylolabis present high variability of morphological features, hence re-analysis of the available data for all species might well lead to the conclusion that fossils now incorporated in extinct subgenera actually could be related to extant members of Dactylolabis. To solve this problem, further studies on placement of the genus Dactylolabis and relationships of the species placed within should also include characters of juveniles (Krivosheina, 2012).

The high incidence of homoplasies revealed in our analysis could suggest that this relict group is in a recent fauna. Almost all fossils of the genus so far reported are from Eocene Baltic amber, and these species are ascribed to extinct subgenera (Evenhuis, 2014). On the one hand, it could suggest rapid diversification and high evolutionary turnover of the representatives of the Dactylolabinae during the Palaeogene; on the other hand, the data available still could be insufficient and biased for conclusive statements, e.g., due to taphonomic reasons and/or properties of taphocoenosis of Baltic amber (Szwedo and Sontag, 2009, 2013). Amber forests of the Eocene covered vast areas of Fennoscandia, and it is evident that various habitats and types of amber forests were present during the Eocene, with diverse floristic compositions that would have offered various and variable conditions (Szwedo and Sontag, 2013). In the early Eocene, low temperature seasonality was not restricted to the tropics, but extended into the high latitudes (Archibald et al., 2013). The Fennoscandia area was diverse not only in latitudinal gradient from north to south, but also in its orography, with elevated, montane areas and lowland areas (Cloethingh et al., 2005). This may have resulted in a high diversity of fauna, as it is observed in Eocene deposits of Okanagan Highlands (Archibald et al., 2013). It must be noted, however, that the Baltic amber samples available for study consist of a mixture of various allochthonous resins, transported to deposit from various sites in vast ancient river basins, differing in relief, climate, and biota (Zherikhin and Eskov, 2007).

The representatives of the recent Dactylobiinae taxa seem to retain some features shared with the other Limoniidae, Limnophilinae, and the extinct taxa seem to be quite specialized and apomorphic. Such specialization, including the occupation of specific ecological niches, could account for their subsequent extinction following changing environmental circumstances. The wide, Holarctic, recent distribution of the subgenus Dactylolabis could be a measure of its evolutionary success - the oldest fossils of the subgenus are known from the Eocene Baltic amber - and its evolutionary capability. The other subgenera are much less numerous in species and present much narrower distributional patterns: Bothrophorus in Eastern Palaearctic (Tadjikistan), Coenolabis in Western Palaearctic (the Carpathian Mts. - Slovakia, Romania and the Caucasus Mts. - Ukraine, Russia, Georgia, Turkey), and Eudactylolabis in the Nearctic (California, Arizona). Such distributions are also interesting from a historical biogeographic perspective. However, more data, including more studies of fossils, are necessary for a fuller explanation of the evolutionary, phylogenetic, and biogeographic history of Dactylolabinae and Limoniidae.

Starý (1992) stated that Dactylolabinae are thought to represent the most primitive group of the Limoniidae. However, he noted that it is difficult to point out apomorphies for this unit, and that it is characterized by plesiomorphies. The status of Dactylobinae as a separate subfamily is under discussion (Starý, 1992; Ribeiro, 2008; Petersen et al., 2010). The position of Dactylolabis is equivocal, with no clear evidence for its placement as a monotypic subfamily or as part of also not well defined ‘Limnophilinae’. The most recent studies of Petersen et al. (2010) recovered Dactylolabis as an independent lineage of uncertain affinity. More attention and further efforts to recognize morphological characteristics and morphological diversity of males and females of Dactylolabinae are necessary to resolve the relationships within this group and its relationships with the other Limoniidae.

We would like to thank Dr. J. Szwedo (Museum and Institute of Zoology, Polish Academy of Sciences, Warsaw) for the help with phylogenetic software.

Krivosheina, N.P. 2012. Analysis of the Taxonomic Structure of the Crane Fly Family Limoniidae (Diptera) Based on the Larval Characters. Entomologicheskoe Obozrenie, 91(1):164-179.

Krzemiński, W. 2000b. A new species and other representatives of the genus Dicranomyia (Diptera: Limoniidae) in the collection of the Museum of Amber Inclusions, University of Gdańsk. Polish Journal of Entomology, 69:347-353.

Osten Sacken, C.R. 1860. New genera and species of North American Tipulidae with short palpi, with an attempt at a new classification of the tribe. Proceedings of the Academy of Natural Sciences of Philadelphia, 1859:197-256.

Osten Sacken, C.R. 1877. Western Diptera: Descriptions of new genera and species of Diptera from the region west of the Mississippi and especially from California. Bulletin of the United States Geological and Geographical Survey of the Territories, 3:189-354.

Podenas, S. 2003b. A new subgenus for Trentepohlia crane flies (Diptera: Limoniidae) with elongated mouth parts, from Baltic amber (Eocene). Proceedings of the Academy of Natural Sciences of Philadelphia, 153(1):67-71.

Ribeiro, G.C. 2008. Phylogeny of the Limnophilinae (Limoniidae) and early evolution of the Tipulomorpha (Diptera). Invertebrate Systematics, 22:627-694.

Zherikhin, V.V. and Eskov, K.Yu. 2007(2006). On the real proportions of the main arthropod groups in the Baltic amber fauna, based on representative sampling. Arthropoda Selecta, 15:173-179.