A new genus and species of Muridae (Rodentia) from the Quaternary deposits of the Denizli Basin, South-western Turkey

This paper describes a new genus and species of Muridae, Extrarius orhuni gen. nov. and sp. from the Quaternary terrestrial deposits of the Denizli Basin (South-western Turkey). The circular island shaped neoenterostyle in the lingual part of M1 and complete stephanodonty show a unique combination of apomorphic characters. These initial fossils provide a starting point, and more studies will surely provide more details on the origins of this taxon and its relationship to other taxa in the wider region.

Copyright: © March 2017 Society of Vertebrate Paleontology. This is an open access article distributed under the terms of the Creative Commons Attribution License, which permits unrestricted use, distribution, and reproduction in any medium, provided the original author and source are credited.
creativecommons.org/licenses/by/4.0/ 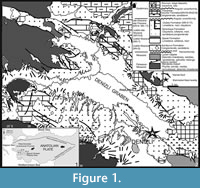 Moreover, related to the micromammalian fauna from these sites, a new genus and species has been found as a result of this post-doctoral research in the Gökpınar locality (GOP), which was dated as MNQ18-19 (1.5-2.6 Ma) (Erten et al., 2015). In addition to this new murid, this locality previously yielded Dryomys tosyaensis, Dryomys sp, Mus denizliensis, and Apodemus sylvaticus / flavicollis (Erten et al., 2015). This locality is quite rich in fossils, nevertheless, during follow-up research eight molars (3 M1s, 2 M2, 1 m1 and 2 m2) representing the new murid species were identified and are herein formally described. They are kept as a part of the fossil collection of The Geological Engineering Department at Pamukkale University.

QUATERNARY DEPOSITS OF THE DENİZLİ BASIN

The Gökpınar locality is included in the Tosunlar Formation, which uncomformably lies on the middle Miocene-Pliocene units and it has been described by Şimşek (1984). The bottom part of the formation is composed of conglomerates, sandstones and siltstones that are covered by travertines. The Tosunlar Formation is usually dominated by red and brown colours and locally it may be coloured gray and yellowish. The Tosunlar Formation starts with the alluvium fan and continues upward with fluvial deposits. The unit which shows levels of different thickness and is composed of alternating conglomerate, sandstone, siltstone and mudstone facies including claystones in some places. Within the unit, plant remains, gastropods, reworked shells and fragments of mollusc at older units are quite common (Erten et al., 2015).

Travertines from the Denizli Basin are internally exploited and exported world-wide. Old travertine formations are widely observed in different parts of the basin, especially along its northern parts. The total area of travertines in the basin covers more than 100 km2 whose thickness is sometimes over 75 m (Erten et al., 2005; Özkul et al., 2013). The depressional field travertines yielded scarce vertebrate fossils in some quarried localities. There are various studies on these fossils (Erten et al., 2005; Kappelman et al., 2008; Boulbes et al., 2014). These travertines in Denizli (Turkey), where Homo erectus was also found, were dated by Lebatard et al. (2014) at least 1.1 Ma. 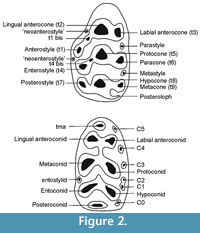 The fluvio-lacustrine sediment was screen washed using a stack of sieves of decreasing mesh size (4 mm-0.5 mm). The fossils were then separated from the non-fossiliferous sediments. Finally, they were examined and studied with a stereomicroscope (Olympus SZX9).

The dental nomenclature follows mainly that of Lazzari et al. (2010) (Figure 2). Double axis Mitutoyo measuroscope was used for measuring the maximum length and width of each tooth and the results are given in millimeters (Table 1). The upper molars are abbreviated as M1, M2 and M3 while lower molars as m1, m2 and m3. The Gökpınar locality is abbreviated as GOP. 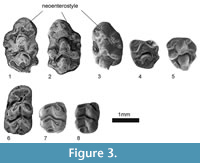 Derivatio nominis. From the Latin word ‘Extrarius’ meaning “external, outsider,” because of the presence of a neoenterostyle on M1, which is an apomorphic character.

Diagnosis. The occlusal surface exhibits complete stephanodonty. The cusps t1, t2 and t3 have strong connections on M1. A connection in the form of a longitudinal crest exists between t1-t5 and t3-t5. A strong and garland-type connection exists between t4-t5-t6-t9-t8 and t7 or t4-t7 connection is absent while the other cusps are strongly connected. A circular island shaped neoenterostyle is observed in the lingual part of the tooth. tma is absent on m1, and c1 and c2 are connected to each other (Figure 3).

Type specimen, Type locality and Diagnosis. As for genus.

Derivatio nominis. In honour of my son; Orhun Erten.

Description of the Material

M1. There are three M1 specimens(GOP 5001-5002-5003) one of which (GOP 5003) is slightly worn and damaged on the back part (Figure 3). One of the complete specimens (GOP 5001) has a complete stephanodonty (on the occlusal face all cups are connected by ridges, Cordy, 1976). t1, t2 and t3 have strong connections in all specimens. A connection in the form of a longitudinal crest exists between t1-t5 and t3-t5. Whereas a strong and garland-type of connection exists between t4-t5-t6-t9-t8 and t7 in one of the specimens (GOP 5001), there exists no connection of t4-t7 in the other two specimens (Figure 3.2-3). t1 and t3 are almost symmetrical, like t4 and t6. A circular island shaped strong neoenterostyle exists in all specimens in the lingual parts of the teeth. The posteroloph is weak. There are three roots.

M2. There are two specimens, one of which (GOP 5005) is worn while the other (GOP 5004) is not. The t1 is oval, large and has a strong connection with t5. The t3, round, is smaller and lower than t1 and is connected to t5. A strong and garland-type of connection exists between t4-t5-t6-t9-t8 and t7 in the worn specimen. There exists no connection of t4-t7 in the other specimen.

m2. There are two specimens (GOP 5007-5008). In both specimens, the anterior side is slightly wider than the posterior end. The anterolabial cuspid is large, oval and has a connection with the protoconid. There is no labial cingulum in our specimens. The posterior tubercule is shaped in the form of an enamel island, and it has a weak connection with the hypoconid. There are two roots.

There are only three species with neoenterostyle: Leilaomys zhudingi (Storch and Ni, 2002), Orientalomys cf. similis (Storch, 1987) and Progonomys clauzoni (Lazzari et al., 2010) (Figure 4). In addition, the genera Apodemus and Stephanomys share with the Gökpınar specimens the stephanodont pattern in the M1, the garland connections of cusps t4-t5-t6-t9-t8 and the crest connections between t1-t5 and t3-t5.

The genus Leilaomys has only one species, Leilaomys zhudingi Storch and Ni, 2002 (Late Miocene, Yunnan Province, China). In the M1 of this species, the t1 is situated posteriorly to t2-t3 and it is connected by a long cingulum-like ridge with t2. Moreover, there is a strong connection between t2-t3 (Figure 4). On the M1s from Gökpınar t1, t2 and t3 have a strong connection and the t1 is not situated backward to t2-t3. In addition, the M1 of Leilaomys does not possess a garland-type of connection between t4-t5-t6-t9-t8 and t7 as on the Gökpınar sample. In Leilaomys t4 is isolated from t5, and the posteroloph is well developed (Figure 4). As a result, the Gökpınar specimens cannot be referred to the genus Leilaomys.

Since the Gökpınar M1s have a strong connection between t1 and t2-t3 and one of them (GOP 5001) has a strong garland-type connection between t4-t5-t6-t9-t8 and t7, they are different from the cusp organisation seen in Orientalomys. Orientalomys cf. similis (Pliocene aged Ertemte in Inner Mongolia, China in Storch, 1987) has a neoenterostyle similar to that of Gökpınar specimens. Yet, in contrast to our specimens, t1 and t4 are far posterior in position, t1 is widely separated from t2, there is connection between t5 and t7 and longitudinal crests are not observable in this genus (Figure 4). Therefore, the Gökpınar specimens show clear differences when compared with this species.

The genus Apodemus shows the most similarity to our specimens because of the stephanodont pattern of M1, and the presence of a crest connecting t4-t8, and also cingular cuspids (c1, c2 and c3) on the m1 (Freudenthal and Martín Suárez, 1999; Storch, 2004). However, in contrast to the Gökpinar specimens, the posteroloph on M1 and the tma on m1 are well developed, and there are not any longitudinal crest connections between t1-t5, t3-t5 in fossil and extant species of Apodemus. Furthermore, since neoenterostyle does not exist in any of Apodemus species, the Gökpınar specimens cannot be included in this genus.

The genus Stephanomys shares with the Gökpınar specimens the stephanodont pattern of M1, the continuous garland of cusps t4-t5-t6-t9-t8 and the longitudinal crest connections between t1-t5, t3-t5. Yet, our specimens have moderately developed longitudinal connections between the tubercles on M1s and a less pronounced stephanodonty when compared to Stephanomys. The t1 bis or t4 bis, which exists on M1 in all Stephanomys species, does not exist in our specimens, and finally the neoenterostyle is seen in none of the species referred to this genus. Because of these differences, the Gökpınar specimens cannot be attributed to any of these genera.

Therefore, the Gökpınar specimens have been described as Extrarius orhuni nov. gen. and sp. because of the presence of neoenterostyle, moderately developed longitudinal connections between the cusps and their garland organization in M1, the lack of tma and the presence of a crest between the entoconid and metaconid on m1.

Renaud et al. (2005) and Rodrigues et al. (2013) divided the murid genera into two groups according to their stephanodonty and garland characteristics. These groups are the Progonomys hispanicus-Occitanomys-Stephanomys lineage, which has both stephanodonty and garland characteristics, and the Progonomys-Apodemus lineage, which shows only garland characteristics. Nevertheless, Lazzari et al. (2010) distinguished Progonomys clauzoni-Leilaomys zhidingi-Orientalomys cf . similis lineage out of the murids based on the presence of a ‘neoenterostyle’, as the M1 from Gökpınar have. Both stephanodonty and garland characteristics exist in our M1 specimens, indicating their affinity with the Progonomys hispanicus-Occitanomys-Stephanomys lineage. However, the members within lineage lack the neoenterestyle contrary to the M1s from Gökpınar. Therefore, the Gökpınar specimens are similar to the Progonomys clauzoni-Leilaomys zhidingi- Orientalomys cf . similis lineage, but in all three species included in this lineage the M1 is not stephanodont and the cusps are not grouped in a garland (Figure 4). So, it is clear that the Gökpınar specimens are different from this group. Mansino et al. (2015) described the species Paraethomys meini from the localities he dated as Miocene-Pliocene. He indicated in his study that 1 out of 16 M1 specimens had neoenterostyle. In contrast to our specimens, t2-t3 are closer to each other compared to the t1-t2 and there is no crest connection between t1-t5 and t3-t5 in these species. The available data on fossil murids do not allow the proposal any reliable hypothesis on the origin and relationships of Extrarius.

I am grateful to Dr. S. Sen (Muséum National d’Histoire Naturelle, Paris) for improving various aspects of this paper through critical reading and for his contribution to improve the presentation of it. J. Louys and anonymous reviewers are acknowledged for their critical comments and contributions, which greatly improved the paper. My final thanks are for my parents and especially my wife M.U. Erten, who contributed to this study by checking my English writing.

Bowditch, T.E. 1821. An Analysis of the Natural Classifications of Mammalia for the Use of Students and Travelers. J. Smith, Paris, France.