Cylindrostethus gaudanti sp. nov., first fossil representative of the gerrid Cylindrostethinae, is described from the Paleocene of Menat (Centre of France). It is very modern in appearance, and its characters are sufficiently preserved to permit specific identification into the genus Cylindrostethus . Its presence in the European Paleogene suggests that this subfamily is very ancient, in accordance with its present disjunct tropicopolitan distribution. The modern Cylindrostethinae are restricted to the tropical rainforests, in accordance with the similar palaeoenvironment of the Menat ancient lake. Possible sexual dimorphic trait in the length of the fore femora is described for the new species.

The fossil record of the Gerridae is not as rich, as could be expected from a semiaquatic family, but this corresponds to a general situation for the aquatic and semiaquatic insects, compared to the fossil record of terrestrial insects. The oldest fossil is dated from Late Albian amber (Perrichot et al., 2005). Nevertheless the representatives of this family are among the gerromorphans that can be readily recognized even in compression fossils (Damgaard et al., 2014). Thus, quite a few representatives from various subfamilies have been described: Gerrinae (see overview in Damgaard, 2008a; Damgaard et al., 2014), Halobatinae (Andersen, 1998), Charmatometrinae (Andersen, 2000) and Electrobatinae that are only known from Dominican amber (Andersen and Poinar, 1992; Andersen, 2000). Fossils of the Cylindrostethinae have not been known yet, although the Eocene Messel genus Cylindrobates incertae sedis could have affinities to the extant Cylindrostethus (Wappler and Andersen, 2004). Here, we describe a fossil from the Paleocene of Menat (France) that is attributable to Cylindrostethus following the key of Andersen (1982) and thus could be considered the first fossil representative of this subfamily and one of the oldest known Gerridae, after the Cretaceous Cretogerris albianus Perrichot et al., 2005.

Preparation was made using a compressed air needle. The specimens were examined under a Nikon SZ10 stereomicroscope. Photos were taken with an Olympus E-3 digital camera. Several digital pictures were reconstructed using Helicon Focus and Adobe Photoshop. SEM microphotographs of the setae were taken with the Environmental SEM of the Muséum national d’Histoire naturelle Paris (MNHN) Collection Department, using the mode BSE. All measurements are given in millimetres. Materials with the labels MNHN are stored in the Laboratory of Palaeontology, Muséum national d’Histoire naturelle, Paris, France. Material with the label MNT is stored in the collection of the town of Menat. The fossils from Menat are preserved as compressions in organic-rich spongo-diatomites, which were deposited in a former small maar lake, currently dated to about 56 Ma (Palaeocene) (Vincent et al., 1977; Michon, 2000; Michon and Merle, 2001). It is also well known for the exceptional preservation of the flora and fauna (Piton, 1940; Wappler et al., 2009). This outcrop is very rich in fossil terrestrial insects, mainly beetles (Curculionoidea, Buprestidae, Cerambycidae, Cupedidae, etc.), Blattodea, and Hemiptera, mainly Heteroptera Pentatomorpha. Aquatic insects are very rare, mainly belonging to the presently described species, even if a Gyrinidae is recorded.

Etymology. After our friend the late Dr. Jean Gaudant, specialist on Cenozoic fishes. 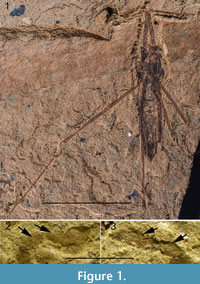 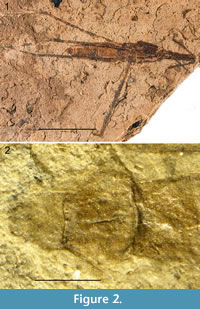 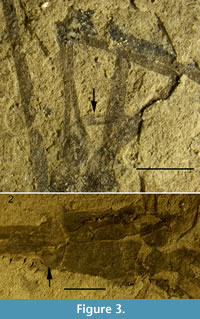 Damgaard et al. (2014) noted that representatives of the subfamily Cylindrostethinae are among the gerrid subfamilies that can hardly be separated on the basis of the fossils. Damgaard (2008b) rejected Cylindrostethinae as paraphyletic, lending more support to the idea of Matsuda (1960) who considered Gerrinae in a broader sense, including some Andersen's (1982) subfamilies as tribes, Cylindrostetini among them. At the same time, Damgaard (2008b) admitted that the non-monophyly of Cylindrostethinae in his analysis is surprising since the female heavily sclerotized second gonapophyses and molecular data (mitochondrial 16S rRNA gene sequences) provided good apomorphies in previous studies. He mentioned insufficient taxon sampling for this subfamily, which could offer an explanation for the conflicting interpretations. Our specimens fit the Cylindrostethinae data matrix of Damgaard (2008b) in the few characters that are observable in the fossil. 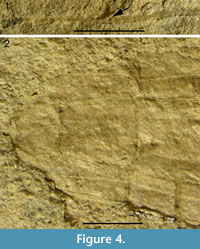 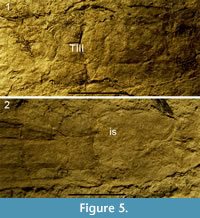 Within the Cylindrostethinae, our fossils fit in the genus Cylindrostethus rather than in the two other genera currently in this subfamily, because Platygerris has a body strongly flattened and a short abdomen (Matsuda, 1960), while Potamobates has a broader mesothorax, the male genitalia generally rotated and a short abdomen (Hungerford, 1937; Padilla-Gil and Damgaard, 2011). Lastly the Eocene Cylindrobathes differs from our fossils in the short fore legs, distinctly shorter than antennae, although its general habitus resembles that of our fossils (Wappler and Andersen, 2004). 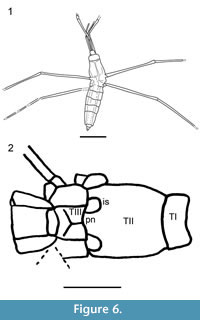 Although the sample is poor (four male and two female measurements) and the fossils are compressed, the fore femora in the males are clearly bigger than in females (5.05 mm against 4.25 mm). This is more striking if we consider that the average body size of females is larger (16.3 to 15.8 mm). The larger fore femur could thus be a sexually dimorphic character in this species, although this hypothesis needs to be tested on more specimens.

The Cylindrostethinae is a tropicopolitan subfamily, with Potamobates present from Mexico to Peru, Platygerris is a South and Central American in distribution, and Cylindrostethus is distributed in South America, Africa, and South-East Asia (Andersen, 1982). It is practically impossible to compare with the different modern species of this genus because of the incomplete preservation of the abdomen and genitalia (Matsuda, 1960). Its presence in the Paleocene of the Central France supports a wider distribution in the past and explains it modern disjunct distribution. Also the palaeoecology of the outcrop (a rainforest surrounding a small lake connected to rivers) fits with the habitat of the modern Cylindrostethus (Polhemus, 1994).

We thank two anonymous referees for the useful remarks on the first version of the paper. We sincerely thank the town of Menat for the loan of the specimen MNT 06 880AB. We also thank our colleague S. Pont for the SEM images.

Andersen, N.M. 1998. Water striders from the Paleogene of Denmark with a review of the fossil record and evolution of semiaquatic bugs (Hemiptera, Gerromorpha). Det Kongelige Danske Videnskabernes Selskabs Biologiske Skrifter, 50:1-157.

Damgaard, J. 2008a. Evolution of the semi-aquatic bugs (Hemiptera: Heteroptera: Gerromorpha) with a re-interpretation of the fossil record. Acta Entomologica Musei Nationalis Pragae, 48:251-268.

Padilla-Gil, D.N. and Damgaard, J. 2011. A new species of Potamobates Champion from Colombia with a re-analysis of phylogenetic relationships (Hemiptera: Gerridae). Zootaxa, 2879:41-49.