The study of the microfossil assemblage of Hauterivian to Lower Barremian strata in Oman led us to identify a new Triploporellacean alga. This species looks similar to some Permian Mizzia Schubert, 1909. It is compared with the latter genus, as well as with the Jurassic Draconisella Granier and Michaud, 1989, both referred to the Tribe Mizziineae. Mizzia being endosporate (with cysts supposedly located inside the main axis) and Draconisella cladosporate (with cysts supposedly located inside the laterals), the new species is ascribed to the latter genus . There are very few records of microfossils from the Hauterivian interval, and this new Dasycladalean alga may prove to be a good marker in shallow-water carbonate environments.

Nowadays the Order Dasycladales is interpreted as a relict group. Its 40 or so living species are set into some 10 genera that in turn are grouped into three families (Bornetellaceae, Dasycladaceae, and Polyphysaceae). Some families (Diploporaceae, Seletonellaceae, Thyrsoporellaceae, and Triploporellaceae) are only known from the fossil record (Granier et al., 2012). We describe below a new representative of the lost Family Triploporellaceae. At first sight, this Early Cretaceous form found in Oman looks similar to the Permian Mizzia (Schubert, 1909), but a closer study reveals differences. 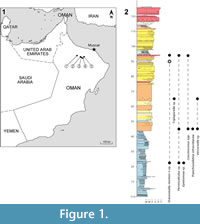 The Lower Cretaceous strata, which are known mostly from the subsurface in many areas of Oman and the United Arab Emirates, crop out in the Al Hajar Mountains. During the course of his Ph.D. thesis, Dujoncquoy (2011) studied s everal sections in wadis that cut deep into this mountain range (Figure 1): from W to E, Wadi Nakhr, Wadi Kamah, Wadi Mu Aydin, Wadi Tanuf, and Wadi Al Fayn. In Abu Dhabi, for decades, practical geologists employed by oil companies have used an interregional stratigraphic framework based on “operational units” (e.g., Hassan et al., 1975). According to Granier (2000) and Granier et al. (2003) most of these units prove to be unconformity-bounded units. In addition, because they can also be characterized by their discrete fossil contents, Granier (2008) treats them as genuine regional stages. The shallow-water carbonate units of the Thamama Group consist from base to top of the Habshan (Tithonian), the Bu Haseer (transition of the Tithonian to the Berriasian), the Belbazem (Berriasian), the Zakum (Lower Valanginian), the Lekhwair (Upper Valanginian - Hauterivian - Lower Barremian), the Kharaib (Upper Barremian - Lower Aptian), the Hawar (Lower Aptian), the Shu’aiba and the Bab (Upper Aptian). However, in Oman, the shallow-water carbonates are missing (e.g., the whole Habshan) or they pass to basinal facies of the Kahmah Group where the correlative conformities were not identified yet. Two facies-driven formations were originally described from Oman: the Rayda and the Salil (Hassan et al., 1975; Granier, 2000; Granier et al., 2003; Granier, 2008). The latest biostratigraphic and chemostratigraphic dating of the Rayda (Celestino et al., 2016) shows that this condensed Maiolica-like facies may span most of the Tithonian - Valanginian interval. The Salil facies is the basinal time-equivalent to the rest of the stratigraphic column (uppermost Valanginian - Aptian pars). 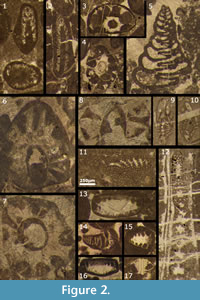 The new alga is found in several wadi sections, at the facies transition (both vertical and lateral) from the Salil below (basinward) to the “Lekhwair” above (landward). It was identified from a set of thin sections, randomly cut for sedimentary petrographic purposes, as well as from some duplicates of the same material. 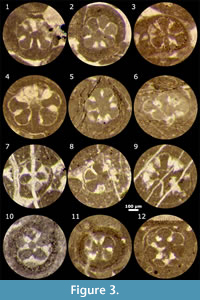 Dasycladalean algae are large unicells. All living forms are verticillated (euspondyl), i.e., their lateral expansions are arranged in whorls along the main axis and communicate with it. Non verticillated (aspondyl) forms are only known from the fossil Family Seletonellaceae. The new Omani alga is verticillated (Figure 3). As with most “calcareous” green algae, its calcification - mostly in the form of aragonite - was extracellular. Therefore the fossil consists of the calcareous coating that moulded both the algal main axis and its laterals. The axial cavity and two relatively larger pores at both ends of the article corresponds to the location of the main axis and the remaining pores passing through the calcareous coating correspond to the vestiges of the laterals. These pores are simple, undivided (primary pores), widening rapidly outward (phloiophorous type) to form a cortex. On the basis of the verticillation and its undivided primary pores, the new species is ascribed to the Family Triploporellaceae (Pia, 1920).

The new Omani alga presents some affinities with Mizzia, another fossil Triploporellacean alga. The latter is an emblematic taxon amongst the “calcareous” green algae due to its typically moniliform thallus, i.e., a thallus consisting of a set of articles arranged as beads on a string. Relatively few Dasycladalean taxa have a moniliform thallus but such arrangement is not restricted to a single family. For instance, it is known from both the Triploporellaceae and the Dasycladaceae. Cymopolia Lamouroux, 1816, a living Dasycladacean genus that has fossil representatives dating back to Cretaceous times, has also a moniliform thallus and can be used as a modern analog. Its articles are delimited by non-calcified constrictions ensuring some flexibility to a living thallus. When the alga reaches maturity and releases gametangia or gametes it begins to break up into discrete articles. Fossil specimens of Mizzia with articles still connected are rather rare (Figure 4.1; Pia, 1937, plate 93, figure 3; Mathieu et al., 2011, Photo 39.b, inter alia). Similarly, genuine axial sections, i.e ., sections passing through the narrow axial openings at both ends of an article, which are rarely documented in Mizzia spp., have not been found yet in our material. The thallus of the new Omani species was probably moniliform although the observed specimens are always found as loose articles. This body plan leads to ascribe it to the Subtribe Mizziinae Bassoullet et al., 1979. 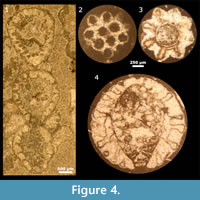 Recently, Hosseini et al. (2014) reviewed all non-Permian occurrences of species referred to the genus Mizzia, including Neomizzia dacica Bucur, 2000, from the Barremian of Romania. They also introduced a new species, Mizzia zagarthica, from lowermost Cretaceous strata of Iran. However, we assume that most of their subtransverse sections are to be attributed to Salpingoporella spp. Furthermore, one would hardly explain the absence of the genus in both Triassic and Jurassic times. Many of the remaining (?) homeomorphs are either poorly documented or illustrated by non-diagnostic sections. Consequently comparisons with our new species would be worthless and we are not going to elaborate further on them. However, comparisons with the Permian Mizziavelebitana Schubert, 1909, and the latest Jurassic Draconisella genoti Granier and Michaud, 1989, are addressed below.

The original material of Schubert (1909, plate XVI, figures 8-11) is probably lost. Pia (1920, plate I, figures 12-23) illustrated new material that he inherited from the late Schubert (1876-1915). This material is preserved in the Collection J. von Pia at the Naturhistorisches Museum in Wien (Wien). We illustrate here three of his specimens from thin sections CXIV-1 (Figure 4.2; Pia, 1920, plate I, figure 13) and CXIV-3 (Figure 4.3-4; Pia, 1920, plate I, figures 20-21) and select the one specimen plate I, figure 20 (Pia, 1920) as the neotype. Pia’s interpretation of the genus can be summarized as follow: The thallus consists of several articles (moniliform type) comprising several verticils each and with a relatively large axial cavity; the pores are simple, undivided (primary pores) and widening distally outward (phloiophorous type) to form a cortex; cysts or gametanges were probably located in the main axis (endosporate type).

The material of Granier and Michaud (1989) is deposited with LPB ("Laboratoire de Paléontologie de Brest") numbers in the collections of the "Département des Sciences de la Terre et de l'Univers, Université de Bretagne Occidentale, Brest" (France). We duplicate here in colour (Figure 5.1-2 and 5.11-12) some black and white photomicrographs of the original paper (Granier and Michaud, 1989, plate 1, figures 2-3 and 5-6, respectively) and also include some unpublished material (Figure 3.3-10). Our interpretation of the genus can be summarized as follow: The thallus consists of several articles (moniliform type) comprising few verticils each and with a relatively narrow main axis; the pores are simple, undivided (primary pores) and widening proximally outward (phloiophorous type) to form a cortex; cysts or gametanges were probably located within the primary laterals (cladosporate type).

We present below models for Mizzia -like (Figure 6) and Draconisella -like algae (Figure 7). Both models focus on the morphology of the main axis and on that of the laterals in relation with their respective reproduction schemes, i.e., endosporate versus cladosporate. As for previous 3D reconstructions of algae (Granier, 2010; Granier and Sander, 2013), they were realized with the Blender free software (https://www.blender.org/). The videos show large axial cavity and thin laterals for the supposedly endosporate Mizzia versus narrow main axis and inflated laterals for the supposedly cladosporate Draconisella. The cysts, which were supposedly located either inside the main axis (endosporate) or inside the primary laterals (cladosporate), are not visible in these models.

With its rather thin main axis and rather large laterals, the new Omani species is ascribed to the genus Draconisella Granier and Michaud, 1989. It differs significantly from the type-species by its morphometric parameters. For instance, the articles of the Mexican species are three times wider than those of the Omani species (see Measurements).

Diagnosis. This Dasycladalean alga exhibits a moniliform thallus with rather short articles on a rather thin and roughly tubular main axis. The calcareous coating dismantled into discrete articles slightly lenticular (thinner than wider) with 4 (or even ? 5) whorls of 6–7 (or even ? 8) densely arranged phloiophorous to vesicular primary pores. The axial cavity of an article is slightly inflated in its median part from where all the laterals are inserted. The connection of the pores with the axial cavity is rather narrow. The pores widen rapidly in their proximal part to become roughly tubular, and they widen again in their distal part to form a cortex. It is assumed the species is cladosporate. Besides, its gross shape measurements (see Table 1) differentiate it from the other representatives of the genus.

Additional comparison. It has been suggested that the new species should be compared to species with a sphaerical morphology, amongst which Rajkaella iailaensis Maslov ex Dragastan and Bucur, 1988, non 1965 (Figure 8). However, we note that:

Draconisella genoti Granier and Michaud, 1989, was described from uppermost Jurassic (Tithonian) strata in Chiapas, Mexico. The find of a new representative of the genus in the Oman mountains unequivocally supports the occurrence of the Tribe Mizziinae up into Early Cretaceous times and more specifically into Hauterivian times. Shallow-water limestones of this age are poorly documented worldwide. The main reason for that is probably the absence of index fossils (Granier and Deloffre, 1993) that would allow its discrimination from the Valanginian below and the Barremian above, as well as the difficulty of accurately defining ages in such environments. Draconisellamortoni sp. nov. may prove to be a good regional marker for strata of Hauterivian age.

Special thanks go to E. Dujoncquoy, who shared with us the data of his unpublished Ph.D. thesis and provided us with the log of the type-locality. We are also grateful to M.M.Q. Morton for having provided the first author invaluable information on his father, the late D.M. Morton (1924-2003). We acknowledge the help of P. Salvador, who polished the English text. We wish to thank the reviewers, F. Barattolo and I.I. Bucur, for their comments on the original version of the manuscript. Part of this research received support from the Synthesis Project http://www.synthesys.info/, which is financed by European Community Research Infrastructure Action under the FP6 "Structuring the European Research Area" Programme. The first author had the opportunity to access Pia’s material and expresses his warm thanks to the Naturhistorisches Museum Wien - Natural History Museum Vienna (Austria), the Department of Geology & Palaeontology, M. Harzhauser (Head of Department), A. Kroh (Curator), and their colleagues.

Granier, B. 1990. The case of the genus Radoiciciella, Dasycladalean a lgae from the Tethyan Upper Jurassic and Lower Cretaceous. Comunicaçoes dos Serviços geológicos de Portugal 75: 29-37.

Granier, B. 2008. Holostratigraphy of the Kahmah regional Series in Oman, Qatar, and the United Arab Emirates. Carnets de Géologie, CG2008_A07:1-34.

Morton, M.Q. 2006. In the Heart of the Desert. Green Mountain Press, Aylesford.

Simmons, M.D. 1990. Aspects of the micropalaeontology and stratigraphy of Cretaceous shelf carbonates from the Oman Mountains. Ph.D. Thesis, University of Plymouth. URL: http://hdl.handle.net/10026.1/2031

Simmons, M.D. and Hart, M.B. 1987. 10 The biostratigraphy and microfacies of the Early to mid-Cretaceous carbonates of Wadi Mi'aidin, p. 176-207. In Hart, M.B. (ed.), Micropalaeontology of Carbonate Environments. Ellis Horwood, Chichester.