Wing venation and male genitalia characters were examined for fossil and extant representatives of family Tanyderidae. Based on morphological evidence, it is hypothesized that two separate evolutionary lineages at the subfamily level exist, namely Tanyderinae Osten-Sacken, 1879 and Nannotanyderinae subfam. nov. Differences between them are stated. New genus and species from Eocene Baltic amber is described and illustrated.

Tanyderidae Osten-Sacken, 1879, is a family of Diptera including 38 extant species among 10 genera (Table 1). More than half of all described species in this family are distributed in the temperate zone of the northern or southern hemisphere, others are either in the subtropical or tropical zone. The tanyderid fossil fauna includes 27 species in seven genera (Table 2), all recorded from Eurasia. Only one genus, Protanyderus Handlirsch, 1909, is represented in both the fossil and extant fauna (Alexander, 1932; Krzemiński and Judd, 1997; Exner and Craig, 1976). 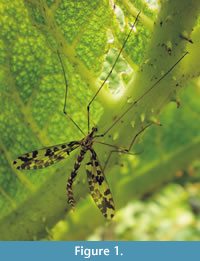 The family is morphologically distinct from other groups of Diptera, both in larval and adult life stages. Adults are small (6 mm body length) to large (30 mm length) in size, with patterned wings and frail, elongate legs (Figure 1). The wings are often sexually dimorphic in size, shape or intensity of banding pattern. The wing venation differs from other Diptera in a greater proportion of plesiomorphic characters (one anal vein reaching the wing margin; five radial veins reaching the wing margin; d-cell closed) (Krzemiński and Judd, 1997). Immature stages of extant species are aquatic to semiaquatic in lotic habitats. Microhabitats include silt and gravel in stream beds, wet, sandy soil in the marginal zone of streams or the outer layers of rotting logs submerged in streams. Adult males sometimes congregate in large swarms in the evenings; spending the daylight hours among the riparian vegetation near the borders of streams (Krzemiński et al., 2013a).

Macrochile spectrum Loew, 1850, from Upper Eocene Baltic amber, was the first described species of family Tanyderidae; however, some of the earliest described tanyderids were incorrectly placed in Ptychopteridae (Loew, 1850; Alexander, 1913). In 1879, Osten-Sacken proposed Tanyderina to include three genera: Macrochile Loew, 1850, Protoplasa Osten-Sacken, 1859 and Tanyderus Philippi, 1865. Alexander (1920) recognized Tanyderina as a family and divided it into two subfamilies, Tanyderinae and Bruchomyiinae. Subsequently, Alexander (1965) determined that Bruchomyiinae actually belonged to family Psychodidae, effectively eliminating as such the subfamilial classification in Tanyderidae.

The current work is based on an examination of many fossil tanyderids as well as representatives in the extant fauna. A new genus and species from Eocene Baltic amber is described, with particular attention given to characters of the wing and male genitalia. Some fossil and extant species can be grouped taxonomically based on similarities of these structures. Considering these characters, at the subfamily level, two evolutionary lineages in Tanyderidae are apparent; therefore, a new subfamily name is proposed here. Outcrops localities of the new subfamily are presented in Figure 2. 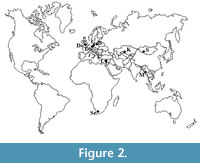 Three specimens (two males and one female) of a new genus described below from Eocene Baltic amber were examined. Two of them (both males) are well preserved, with many pertinent characters clearly visible. The specimens housed in the Natural History Museum in Kraków, Poland.

Differential diagnosis. Male genitalia small with short and wide gonopods; gonocoxite usually broad at base and about three or four times as long as wide; specimens medium or large size compared to those of a new subfamily described below; vein Sc markedly longer than half the wing length; wing with clearly visible coloration. 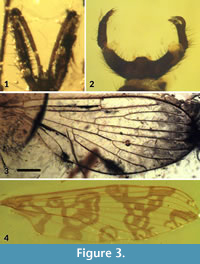 Description. Fossil species small in size, without elongated abdominal segments. Wings small with lengths ranging from 1.56-4 mm, only Peringueyomyina with a larger wing, approximately 10 mm in length. Wing membrane hyaline, without patterning; usually with a developed anal lobe; vein Sc short in fossil species, approximately half wing length, longer in Peringueyomyina; d-cell closed; Rs longer than R4+5. Extant species characterized by conspicuous, elongate rostrum. Antennae elongate (except in Peringueyomyina); usually with 16 articles (17 in Dacochile) with elongate, cylindrical flagellomeres. Legs elongate, each with two tibial spurs (absent in Dacochile). Male genitalia conspicuous, with strikingly elongate gonopods, their length when at rest being equal to as much as 3/4 abdomen length.

Remarks. This species is represented by two specimens preserved as wing imprints in a sedimentary rock. Wing length 2.8 mm. It is the oldest record of Tanyderidae, described from the Lower Jurassic (Sinemurian, 195 Ma; Cohen et al ., 2013) of England. Compared to other described species of Nannotanyderus, N. oliviae differs in that veins Rs, R4+5 and R4 form a nearly straight line, and vein R4+5 is shorter.

Remarks. As for N. krzeminskii, this species is known from the Lower Toarcian of Grimmen, Germany. It is the largest species of this genus, with a wing length of approximately 4 mm. This species differs from other members of Nannotanyderus (except N. ansorgei) in that vein Sc ends apical to the fork of Rs into R4+5 and R2+3. It differs from N. ansorgei in that vein R1 ends apical to the fork of R2+3 into R 2 and R4 and in the shorter length of vein R4+5.

Remarks. Nannotanyderus incertus has a wing length of approximately 2 mm. Its description is based on an incomplete wing from the Upper Jurassic of Shar-Teg, Mongolia. Provisional placement of this species in Nannotanyderus was due to the small size, short vein R2, three times shorter than R2+3, and Sc as long as approximately half wing length.

Remarks. The wing of N. kubekovensis is approximately 2.9 mm long. It is described from the Upper Jurassic of Karatau, Kazakhstan. Veins in the medial sector are markedly longer than other species in this genus. Moreover, vein M1 in this species is longer than the length of d-cell, and cross-vein m-cu is located behind the fork of M3+4.

Remarks. Nannotanyderus ansorgei is the smallest known tanyderid, with a wing length of 1.56 mm. It is described from Lower Cretaceous Lebanese amber and is the species for which the morphology of Nannotanyderus could first be observed in its entirety (others described prior to this were based only on wings). The male habitus of N. ansorgei is exemplary of Nannotanyderinae; thus, it was selected as type species of the subfamily. The length of the gonopod at rest in this species is approximately 3/4 the total length of the abdomen (Figure 9). In the wing, vein Sc ends apical to the fork of Rs into R4+5 and R2+3 and cross-vein r-m is placed at a level approximately 2/3 along the length of the d-cell (Figure 10.1).

Remarks. Dacochile microsoma is described from Cretaceous Burmese amber and is among the smaller species of Nannotanyderinae; however, with a wing length of 2.8 mm, it is significantly larger than N. ansorgei. In the wing, the anal lobe is greatly reduced and vein Sc terminates at a point corresponding to one third the length of vein Rs (Figure 12.1). Woodley (2005) discussed the placement of Dacochile in Tanyderidae and stated that this genus should be transferred to Psychodidae. Despite a detailed explanation and justification for placing Dacochile in Tanyderidae, and the description of a new specimen by Poinar and Brown (2006), the taxonomic placement of this genus remained uncertain. Subsequently, Krzemiński et al. (2013a) described from Myanmar amber a male of D. microsoma showing pertinent characters that confirm its classification as a tanyderid.

Etymology. The new genus name is dedicated to Dr. Robert Coram for his assistance in this research.

Differential diagnosis. Wing length 4 mm; width 1.7 mm; vein R2+3 is short, about half the length of R2; vein Sc apex at about one-third length of R2+3; vein R2 is long, about twice as long as R4+5. Coramus gen. nov. differs from Dacochile in the length of vein Sc, which in the latter ends at one-third length of Rs and in proportion of Rs to R2+3. Coramus gen. nov. differs from Nannotanyderus in having a long vein R2, about twice as long as R2+3. Male genitalia with gonopods elongate; gonocoxite cylindrical, about five times as long as wide; gonostylus bifurcate apically, with branches of bifurcation short, their length equal to half the width of the gonostylus, each with a prominent, spiniform seta inserted apically. Aedeagal complex conspicuous, aedeagus with three phallotrema.
Description. Monotypic genus. Description of genus same as for species. 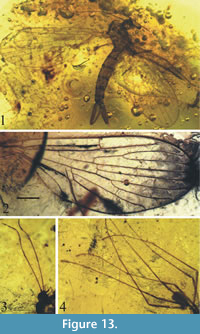 Etymology. " Gedanensis " given after old name of Gdańsk -- capital of amber in Poland.

Material. Holotype No MP/3376; Paratype No MP/3377. Both from Upper Eocene Baltic amber. They are deposited in the Institute of Systematics and Evolution of Animals, PAS, Krakow, Poland.

Remarks. Peringueyomyina is a monotypic genus and the only tanyderid known to occur in South Africa. With a wing length of approximately 10 mm, P. barnardi is the largest species of Nannotanyderinae. This species is unique within extant Tanyderidae in having an elongate rostrum and a hyaline wing membrane with a lesser-developed anal lobe (Figure 15). In the wing vein Sc is longer than most other species in this subfamily, ending opposite about two-thirds the length of R2+3 (Figure 16.1). As with the fossil member of Nannotanyderinae, Peringueyomyina can be characterized by elongated gonopods (Figure 15, Figure 16.2). However, in the latter, the number and arrangement of spiniform setae on the gonopods differs from any fossil species.

For Keys to Subfamilies and Genera see Appendix.

The earliest record of subfamily Nannotanyderinae is Nannotanyderus oliviae from the Lower Jurassic (Sinemurian, about 190 Ma) of England (Figure 4). All Jurassic species have been described only on the basis of wing venation from isolated wing imprints in sedimentary rock. Later, the description of Nannotanyderus ansorgei from Lower Cretaceous Lebanese amber (about 130-135 Ma: Maksoud et al., 2014) enabled the first observation of an intact body of a Mesozoic tanyderid. This made it possible to examine all important morphological features, particularly the male genitalia. Coramus gen. nov. from Eocene Baltic amber (aged within the range of 38-47 Ma: Ritzkowski, 1997; Perkovsky et al., 2007) has a male genitalia with an external structure comparable to that of genera Nannotanyderus, Dacochile and Peringueyomyina. The new genus, therefore, helps to bridge the temporal gap between Lower Cretaceous and extant members of the subfamily.

Tanyderidae and Psychodidae are the only extant families currently placed in suborder Diarchineura, a group hypothesized as the most ancient lineage of Diptera (Krzemiński, 1992; Krzemiński and Krzemińska, 2003). This group also includes extinct families such as Grauvogeliidae (Lower/Middle Triassic), Kuperwoodidae (Upper Triassic), Hennigmatidae (Lower Jurassic to Lower Cretaceous) and Nadipteridae (Lower/Middle Triassic to Lower Jurassic) (Krzemiński and Krzemińska, 2003; Shcherbakov et al., 1995). Recent phylogenetic studies based primarily on molecular data have found that Trichoceridae, Tipulidae, Nymphomyiidae, Deuterophlebiidae, Ptychopteridae and Blephariceridae are also among the most ancient lineages of the order (Bertone et al., 2008; Wiegmann et al., 2011). To date no phylogenetic study of Tanyderidae is existing, and its relationships within the family remain poorly understood; however, continued study of both fossil and extant species is likely to help in reconstructing the phylogeny. This will also be helpful for clarifying relationships of Tanyderidae with other families such as Psychodidae and Blephariceridae.

I wish to thank W. Krzemiński for all his assistance and for all the discussions on amber and its inclusion. I am deeply indebted to G. Curler for his helpful suggestions and improvements to this manuscript and I. Madriz for lending photos. I would like to acknowledge the reviewers for their instructive comments on elder version of this paper.

Alexander, C.P. 1913. Revision of the South American dipterous insects of the family Ptychopteridae. Proceedings of the United States National Museum, 44:331-335.

Byers, G.W. 1989. Homologies in wing venation of primitive Diptera and Mecoptera. Proceedings of the Entomological Society of Washington, 91(4):497-501.

Osten-Sacken, C.R. 1859. New genera and species of North Ametica Tipulidae with short palpi, with an attempt at a new classification of the tribe. Proceedings of the Academy of Natural Sciences of Philadelphia, 1859:197-254.

Poinar, G.O. and Brown, A.E. 2004. A new genus of primitive crane flies (Diptera: Tanyderidae) in Cretaceous Burmese amber, with a summary of fossil tanyderids. Proceedings of the Entomological Society of Washington, 106(2):339-345.