The first occurrence of the ostracod genus Nemoceratina (subgenus Pariceratina) Gründel and Kozur, 1972 (Podocopida, Bythocytheridae) in the Quaternary of the Mediterranean area is reported and the paleoenvironmental significance of this palaeopsychrospheric genus is discussed in the context of the geological history of the Tethydean area. A new species Nemoceratina (Pariceratina) barrieri n. sp., is described. The specimens have been discovered in “Cala S. Antonino” along the western slope of the Cape Milazzo Peninsula (Northeastern Sicily) in Gelasian sandy-silty sediments cropping out unconformably on a conglomerate attributed to the Tortonian (Upper Miocene) and formed as a result of the erosion of the underlying metamorphic rocks belonging to the “Calabride Complex”. The genus Nemoceratina seems to be widespread in the Middle Triassic sediments of Central Europe where it is considered a palaeopsychrospheric ostracod, i.e. a marker of palaeoclimatic and palaeoecological conditions characteristic of deeper and cold Triassic ocean waters. Monoceratina becomes scarcer in the Cenozoic, but maintains its psychrospheric characteristics. The genus is very rare in the Quaternary, and its discovery in the Pleistocene deep water sediments suggests that it has maintained its ecological requirements through time. The species Nemoceratina (Pariceratina) barrieri n. sp., is considered a residual element of the deep water Tethyan ostracod fauna.

The ostracods belonging to the genus Nemoceratina (subgenus Pariceratina) Gründel and Kozur, 1972 are extremely rare and poorly known, especially in the post-Mesozoic. Few reports exist for the Cenozic (Whatley and Boomer, 1995), while in the Recent reports are very rare (Boomer and Whatley, 1995). 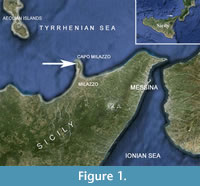 There are no listed reports of this genus in the Mediterranean area. The first occurrence of Nemoceratina (Pariceratina) Gründel and Kozur, 1972 is reported here for specimens found in bathyal sediments cropping out in “Cala S. Antonino” (Cape Milazzo, NE Sicily) deposited during the Gelasian Stage, and a new fossil species belonging to this genus and subgenus is erected. 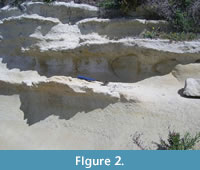 Discontinuous lenses of yellowish fine sands and silts crop out along the steep slopes of the Cape Milazzo Peninsula (NE Sicily) (Figure 1). The sandy-silty sedimentary succession rests unconformably on shallow-water Miocene limestones, directly on the metamorphic basement of the Calabride Complex, or on a conglomerate formed as a result of the fragmentation of the underlying metamorphic rocks. The sedimentary succession is truncated by the Tyrrhenian erosive surface, with a thin layer of polygenic conglomerates deposited on it. The sedimentary sequence is terminated by Aeolian volcanic ashes. 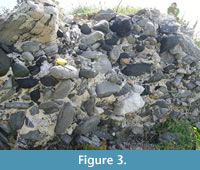 At Cala S. Antonino the Gelasian layers (Figure 2) crops out unconformably on a conglomerate (Figure 3) attributed to the Tortonian (Fois, 1990a, 1990b) and formed as a result of the fragmentation of the underlying metamorphic rocks of the “Calabride Complex”. In the Gelasian sediments, just on the unconformity with the underlying conglomerates, some specimens belonging to Bythocytheridae Sars, 1866 were found; they do not appear to be related to any known species.

Two samples were collected from the same stratigraphic level. Ostracods were studied from 300cc samples. Sediments were routinely washed and ostracod specimens picked out from the 63-500μm fraction. The ostracod specimens were examined, photographed, and measured under LMU Tescan Vega II SEM. The material is housed in the Palaeontological Museum of the University of Catania. The repository number of the Holotype and the Paratypes are given in the systematic descriptions. 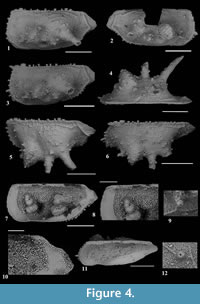 Type locality. Cala S. Antonino along the western side of the Cape Milazzo Peninsula (Tav. Milazzo, F.253 IV SO, 38°15’40”N, 15°14’12”E) in the yellow sandy silts of Gelasian Stage cropping out unconformably on a conglomerate consisting of metamorphic elements of the “Calabride Complex”.

Derivatio nominis. The species is named after Prof. Pascal Barrier, Geologist, Dean at the Institut Polytecnique LaSalle-Beauvais (France), for his scientific engagement in Sicily.

Other material. A single left valve of a juvenile from the same locality.

The anterior and posterior marginal area is wide and flattened. Central part of the carapace is inflated with three prominent elements aligned in antero-posterior direction. The first anteriorly is a large and acute spine like a tubercle with a very large base; the second, centrally, is an acute spine; the third in postero-central area is a longer spine, acute and inclined ventrally.

Outer surface ornamented with a weak and irregular polygonal reticulum, which also affects the surfaces of tubercles and the spines. This ornamentation dissolves in antero-dorsal and mid-posterior area. Caudal process ornamented with a chevron-shaped ridge running into the ventral margin (Figure 4.1-3). Marginal ridge well marked and developed along the valve outline except for dorsal area (Figure 4.1-3). A broad oblique median sulcus is present between the first and the second anterior spine. Eye tubercles are absent.

Normal pore-canals few and simple, some of which on tubercles (Figure 4.9, 4.12). Inner lamella: anteriorly and postero-ventrally wide (Figure 4.7-8, 4.10). Anterior and posterior vestibula are present. Marginal pore canals are not visible, and there is no evidence of sexual dimorphism. Hinge is simple and straight and consists of a groove parallel to the dorsal margin in the RV (Figure 4.7-8, 4.10-11), LV complementary. Muscle scars are not visible.

Weaver (1982) highlights the diagnosis of both genus and subgenus. The species P. tricuspidata (?) is assigned to the genus Nemoceratina, because of the general shape of the shell and the three prominent lateral spines, and to the subgenus Pariceratina using the surface morphology partially characterized by spines, tubercles, and a geometric reticulation, as well as by a very simple hinge.

Nemoceratina (Pariceratina) barrieri n. sp. shows some similarities with the other species of the genus and subgenus mainly because of the general shape of the carapace and the three strong lateral spines. However, the species is distinguished from the type species of the subgenus, Nemoceratina (Pariceratina) tricuspidata (Jones and Hinde, 1890) essentially because the new species is longer.

Indeed, Nemoceratina (Pariceratina) tricuspidata (Jones and Hinde, 1890) described by Weaver (1982) from the Cenomanian of south England, by Slipper (1997) from the Turonian of south-east England, and by Pyne (2001) from the Upper Cretaceous of eastern England, appears smaller. Besides, the new species shows a different distribution of the tubercles on the valves surface, as well as a different position of the three spines on the carapace, i.e. in a more central position than in the type species.

Compared to the species here described, Pariceratina trispinosa (Neale, 1975), shows a much more irregular valve surface, an anterior margin not regularly curved, and a different position and shape of the caudal process.

Pariceratina sp. 1 found by Boomer and Whatley (1995) in submarine cores of the western Pacific is distinguished from N. (Pariceratina) barrieri n. sp. mainly because the polygonal reticulum entirely covers the carapace.

Nemoceratina (Pariceratina) barrieri n. sp. is quite similar to Pariceratina liebaui (Dingle, 1984), because of the spinous outline anteriorly and postero-ventrally, the marginal ridge and the ornamentation of the caudal process; it is however distinguished by the position and dimensions of the three spines.

The data relating to the findings of the genus Nemoceratina shows a wide stratigraphical distribution from the Trias to the Recent. In the Mesozoic, this genus shows a wide palaeogeographical distribution that includes the South Tethyan Ostracod Province (sensu Andreu et al., 2008) (Neale, 1975; Dingle, 1984; Benson et al., 1985; Andreu et al., 2008; Guzel, 2012) and the Central European basins (Damotte et al., 1981; Dépêche, 1985; Wilkinson, 1988; Bless et al., 1990; Slipper, 1997; Schudack and Schudack, 2000; Pyne, 2001) in which at least two brief Tethyan faunistic incursions occurred during the early Campanian and the middle late Maastrichtian (Bless et al., 1990). Therefore the discovery of Nemoceratina in the Mediterranean Pleistocene deep water deposits suggests that they are a residual element of the Tethyan ostracod fauna.

Taking into account the data currently published, Nemoceratina specimens are almost always referred to deep water palaeoenvironments, both in the Mesozoic and in the Cenozic (Dingle, 1981; 1984; Boomer and Whatley, 1995; Boomer, 1999; Guernet and Bellier, 2000, inter alias). As a consequence, the ecological requirements of the genus Nemoceratina do not seem to have changed through time, apparently always remaining a deep water genus.

According to Kozur (1991) and Aihua (2008) the genus Nemoceratina in the Trias was included in palaeopsychrospheric ostracod assemblage, so it would be a marker of palaeoclimatic and palaeoecological conditions characteristic of the deeper Triassic ocean waters.

Data on Triassic palaeopsychrosphere are scarce and incomplete, but further discoveries of the genus Nemoceratina in post Eocene sediments (beginning of the modern psychrosphere according to Benson, 1975, 1984 and McKenzie, 1982) suggests that the genus would keep psychrospheric characteristic through the time. The stability of the chemical-physical characteristics of the deep water palaeoenvironment, and especially of the psychrosphere, would permit the survival of the genus through time.

The author is grateful to the reviewers and to the editors for the detailed suggestions and corrections to the manuscript. Thanks are also due to Mr. A. Viola (University of Catania) for collaboration and SEM photos. Catania Palaeoecological Research Group contribution n. 391.

Benson, R.H. 1972a. Ostracodes as Indicators of Threshold Depth in the Mediterranean during the Pliocene, p. 63-73. In Stanley, D.J. (ed.), The Mediterranean Sea: a natural sedimentation laboratory. Stroudsburg, PA.

Benson, R.H. 1975. The origin of the psychrosphere as recorded in changes of deep-sea ostracodes assemblages. Lethaia, 8:69-83.

Benson, R.H., Chapman, R.E., and Deck, L.T. 1985. Evidence from the Ostracoda of mayor events in the South Atlantic and World-wide over the past 80 million years, p. 325-350. In Hsu, K.J. and Weisser, H.J. (eds.), South Atlantic Paleoceanography. Cambridge University Press, Cambridge.

Dingle, R.V. 1981. The Campanian and Maastrichtian Ostracoda of South-East Africa. The Annals of the South African Museum, 85:1-181.

Dingle, R.V. 1984. Mid-Cretaceous Ostracoda from Southern Africa and the Falkland Plateau. The Annals of the South African Museum, 93:97-211.

Fois, E. 1990 b. Stratigraphy and palaeogeography of the Capo Milazzo area (NE Sicily, Italy): clues to the evolution of the southern margin of the Tyrrhenian basin during the Neogene. Palaeogeography, Palaeoclimatology, Palaeoecology, 78:87-108.

Jones, T.R. and Hinde, G.J.1890. A supplementary monograph of the Cretaceous Entomostracea of England and Ireland. Monograph of the Palaeontographical Society, 43:1-70.

Norman, A.M. 1861. On species of Ostracoda found in Northumberland and Durham, new to Great Britain. Transaction of the Tyneside naturalist, Cl. 5: 143-155.

Schornikov, E.I. 1988. The pathways of morphological evolution of Bythocytheridae, p. 951-965. In Hanai, T., Ikeya, N., and Ishizaki, K. (eds.), Evolutionary Biology of Ostracoda - Its Fundamentals and Applications. Developments in Palaeontology and Stratigraphy, 11. Elsevier and Kodansha, Tokyo.

Schudack, U. and Schudack, M.E. 2000. Ostracods from the Upper Jurassic (Oxfordian-Tithonian) of Southern Germany. Journal of Micropaleontology, 19:97-112.

Weaver, P.P.E. 1982. Ostracoda from the British Lower Chalk and Plenus Marls. Monograph of the Palaeontological Society, London, Publication 562, Part of Volume 135 for 1981.

Whatley, R. and Boomer, I. 1995. Upper Oligocene to Pleistocene ostracoda from guyots in the western pacific. Holes 871A and 873 B. Proceedings of the Ocean Drilling Program, Scientific Results, 144:87-96.