New representative of the family Panorpodidae (Insecta, Mecoptera) from Eocene Baltic Amber with a key to fossil species of genus Panorpodes

Panorpodidae (short-faced scorpionflies) is a species-poor family of scorpionflies (Mecoptera). Fossils are extremely rare but indicate that this group was diverse in the past. Up to now, three species of the genus Panorpodes have been described from Eocene Baltic amber, as well as a possible panorpodid from the Lower Eocene of Patagonia. Panorpodes gedanensis sp. n. is the fourth species to be recognised in amber material. Wing markings are the most important character in the taxonomy of fossil short-faced scorpionflies. The new species described here shows a new pattern of markings - five dark spots and a terminal band. The Eocene representatives of the genus Panorpodes display different patterns of wing markings: highly transparent wings in P. brevicauda (Hagen, 1856), transparent wings with dark bands and spots in P. weitschati Soszyńska-Maj and Krzemiński, 2013, narrow transparent bands on a dark background in P. hageni Carpenter, 1954 and regular spots in P. gedanensis sp. n. This past diversity and distribution emphasises the relictual status of extant Panorpodidae. A key to fossil species of the genus Panorpodes based on characters of the forewing is provided.

The order Mecoptera has a fossil record extending back to the early Permian. Up until the early Cretaceous scorpionflies were very diverse and subsequently underwent a decline (Novokshonov, 2002; Grimaldi and Engel, 2004).

The short-faced scorpionflies (Panorpodidae) is a species-poor family, with 13 extant species (Zhong et al., 2011) of relict distribution. Panorpodidae and Panorpidae are only two families which survived since the Eocene apex of Panorpoidea (sensu Willmann, 1989) diversity until present (Archibald et al., 2013). The fossil panorpids are represented by two putative genera. Austropanorpodes gennaken Petrulevičius, 2009, from the Lower Eocene of Patagonia, is the sole representative of this genus (Petrulevičius, 2009). However, its affinity to Panorpodidae is not strongly supported, but if confirmed, it would be the only known member of the family from the Southern Hemisphere. The other genus known from fossils is Panorpodes, and in addition to the new species described here, three species have been recorded from Eocene Baltic amber: P. brevicauda (Hagen, 1856), P. hageni Carpenter, 1954 and P. weitschati Soszyńska-Maj and Krzemiński, 2013.

Amber inclusions of Mecoptera which are sufficiently well-preserved to be studied are very rare, and all fossil data are important for understanding the history of this family. Consequently, the discovery of a new fossil species of Panorpodidae is of great interest. To date, only 12 species from three families of Mecoptera have been recorded from Baltic amber: Bittacidae (five species), Panorpidae (three species) and Panorpodidae (four species, including the one described here) (Pictet-Baraban and Hagen, 1856; Carpenter 1954, 1955, 1976; Krzemiński, 2007, Krzemiński and Soszyńska-Maj, 2012; Soszyńska-Maj and Krzemiński, 2013).

A description of new species of Eocene Panorpodidae from Baltic amber and a key to fossil species of the genus Panorpodes based on the wings are presented here.

The study was based on a single inclusion in Baltic amber, dated late Eocene, Priabonian (Perkovsky et al., 2007) from the collection of Christel and Hans Werner Hoffeins, Hamburg, Germany. The holotype will be deposited in Senckenberg Deutsches Entomologisches Institut (SDEI), Müncheberg, Germany.

The specimen was studied with the use of a Leica MZFLII stereomicroscope, under reflected and transmitted light. Photographs were made with a Leica DFC295 camera attached to the microscope. Drawings were made from the photographs on a digital tablet as proposed by Coleman (2003). The wing venation terminology follows Willmann (1989).

Holotype. Sex unknown, No. 1193-2, amber embedded in polyester resin (Hoffeins, 2001). Inclusion with well-preserved head, thorax and complete wings, the ventral side not visible due to white milky coating; wings folded, therefore only forewing venation is clearly visible. The inclusion will be deposited as a part of the amber collection of the Senckenberg Deutsches Entomologisches Institut (SDEI), Müncheberg, Germany.

Diagnosis. Differs from all other fossil members of the genus in that the wings are transparent with five dark, oval spots and dark coloured apical parts, compared to narrow, unregular broken bands of P. weitschati, dark wings with narrow transparent bands of P. hageni and completely transparent wings of P. brevicauda from Baltic amber.

Description. Eyes large and round, rostrum short, only partly visible; antennae filiform, scapus and pedicel not visible, flagellum composed of 43 segments, mostly equal in length, gradually become narrower, last flagellomere thinner, half the length of previous one. Wings narrow; fore wing: 14.2 mm long, 4.1 mm wide; membrane transparent, with five clearly visible dark spots; one large spot in basal part of wing, four regularly distributed spots in central part, apical margin of wing with broad band extending from R2 to M3; Sc1 joining costa at the level of Rs fork, Sc2 reaches pterostigma at fork of R2+3; one crossvein c-sc in coastal area across fork of Rb; R1 characteristically sharply curved just above fork of R2+3, one oblique cross vein between Sc and R1 just across Rs fork; R2+3 about 0.2 longer than Rs and three times longer than R2, Rs twice as long as R2 and twice length of R4+5; R3 simple; R4 almost six times longer than R4+5; M1 slightly longer than M1+2 (about 0.125 longer); M4 seven times longer than M3+4; m-cu joins M4 with vein CuA; A1 joining posterior margin of wing across the Rs fork; A2 reaching posterior edge in the middle of Rs; one crossvein between A1 and A2;

See Table 1 and Figure 3 for key to fossil species. 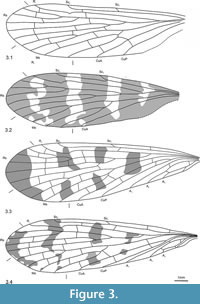 There are 757 species of scorpionflies in the extant fauna (Zhang, 2011), the majority belonging to two of the nine recognised families. More than 400 fossil species of Mecoptera have been described in 16-27 families, depending on the author (Willmann, 1978; Carpenter, 1992, Novokshonov, 2002) and including recently described families (Bashkuev, 2011, Archibald et al., 2013, Krzemiński et al., 2015). The huge morphological diversity combined with the modest number of extant taxa supports the view that extant Mecoptera are only the remnants of a once very diverse group (Penny, 1975). Family Panorpidae is currently the most diverse and abundant, containing about 400 species belonging to six genera (Chau and Byers, 1978; Cai et al., 2008; Cai and Hua, 2009; Ma and Hua, 2011; Zhong and Hua, 2013). This family has a disjunctive holarctic distribution with some representatives in the oriental region (Archibald et al., 2013) and to date there is no fossil evidence for a wider past distribution (Ding et al., 2014). The second most abundant family of scorpionflies is Bittacidae, with ca. 170 species in 16-20 genera distributed worldwide (Penny, 1997; Petrulevičius, 2003; Tan and Hua, 2009; Yang et al., 2012).

In comparison, the short-faced scorpionflies (Panorpodidae) is a small family containing 13 extant species within the genera Brachypanorpa Carpenter, 1931 and Panorpodes MacLachlan, 1875 (Byers, 2005; Zhong et al., 2011). All five representatives of the genus Brachypanorpa and one Panorpodes species live only in North America (Byers, 2005), whilst the remaining Panorpodes species occur in Japan, Korea and China (Tan and Hua, 2008; Zhong et al., 2011). However, in the Eocene Panorpodidae were probably more diverse; the four described species from Baltic amber being numerically equivalent to 50% of extant species in this genus. In comparison, the two species of the genus Panorpa and five bittacids of the genus Bittacus described from Baltic amber equate to merely 0.8% of extant species of Panorpa and 4% of the genus Bittacus, respectively. Nevertheless, representatives of Panorpodidae and Panorpidae are less abundant than Bittacidae in amber (Krzemiński and Soszyńska-Maj, unp. data). Wing markings are the most important character in the taxonomy of fossil short-faced scorpionflies. The newly described taxon shows a new pattern of markings - five regular dark spots and a terminal band. The fossil representatives of the genus Panorpodes, all Eocene, display different patterns of wing markings: highly transparent wings in P. brevicauda, transparent wings with dark bands and spots in P. weitschati, regular spots in P. gedanensis sp. n. and narrow transparent bands on a dark background in P. hageni. However, only one species, P. brevicauda with transparent wings, is common in Baltic amber, whereas the remainder are known only from single specimens (Soszyńska-Maj and Krzemiński, 2013). Fully transparent wings predominate in extant Panorpidae, being characteristic of five species. Only three living species have coloured wings (Zhong et al., 2011).

The distribution of extant panorpodids is limited to a small area of the Northern Hemisphere. The fossil evidence indicates that Panorpodidae were present in Europe during the late Eocene and possibly also in South America. They subsequently became extinct in these regions and declined in overall diversity. The past distribution and diversity emphasises the relictual status of extant Panorpodidae.

We thank C. and H.W. Werner Hoffeins, the well-known German collectors who provided us with the specimen of P. gedanensis sp. n. for study. We are very grateful to R. Coram for his suggestions and help in preparing the English versions of the manuscript and anonymous referees for pertinent remarks, which considerably enhance the paper value. This work was fully supported by a National Science Center of Poland (DEC-2013/09/B/NZ8/03270).

Cai, L.J. and Hua, B.Z. 2009. A new Neopanorpa (Mecoptera, Panorpidae) from China with notes on its biology. Deutsche Entomologische Zeitschrift, 56:93-99.

Hoffeins, H.W. 2001. On the preparation and conservation of amber inclusions in artificial resin. Polish Journal of Entomology, 70:215-219.

Krzemiński, W. 2007. A revision of Eocene Bittacidae (Mecoptera) from Baltic amber with the description of a new species. African Invertebrates, 48:153-162.

Krzemiński, W. and Soszyńska-Maj, A. 2012. A new genus and species of scorpionfly (Mecoptera) from Baltic amber, with an unusually developed postnotal organ. Systematic Entomology, 37:223-228.

Krzemiński, W., Soszyńska-Maj, A., Bashkuev, A., and Kopeć, K. 2015. Revision of the unique Early Cretaceous Mecoptera from Koonwarra (Australia) with description of a new genus and family. Cretaceous Research, 52:501-506.