Investigation of fossils in lower Eocene Fushun amber from China keeps proving to be of major importance for understanding Eocene Euro-Asian insect diversity and distribution. Three new species of predatory biting midges in the fossil genera Mantohelea and Gedanohelea are described. Mantohelea sinica n. sp., Gedanohelea fushunensis n. sp. and Gedanohelea liaoningensis n. sp. from Eocene Fushun amber have their closest relatives in European Eocene Baltic amber. This not only expands generic distribution range from Europe to Asia but also strengthens the hypothesis that dispersal between both regions took place even though the Euro-Asian landmasses were separated by the Turgai Strait during the Eocene. In addition, the fossils supply evidence for a lower Eocene age of Baltic amber.

Fushun amber is collected in mining districts in the south of Fushun City, Liaoning Province, China. It is dated as lower Eocene (53 Ma) (e.g., Wang et al., 2014), at the beginning of the Early Eocene Climatic Optimum (EECO) (e.g., Zachos et al., 2008). Although Fushun amber has been known for over a century it has not been matter of scientific research until recently. A comprehensive study of inclusions from Fushun amber has revealed faunal links to Baltic amber, proven by a genus of scuttle flies ( Eosciadocera Hong) (Wang et al., 2014).

Biting midges (Ceratopogonidae) are a large, relatively well-studied family of Diptera. The recent world fauna comprises 6267 extant species grouped in 111 genera and four subfamilies (Borkent, 2016). The family has a rich fossil record from the Lower Cretaceous to the Miocene with 283 species (Borkent, 2016). With 109 named species in 26 (seven fossil, 19 extant) genera recorded (Szadziewski, 1988; Sontag and Szadziewski, 2011), the Eocene Baltic amber fauna is the best studied one.

Until now, only two fossil biting midges have been formally described from Fushun amber: one in the extant genus Forcipomyia Meigen, 1818 (Hong, 1981, Szadziewski, in press) and one in the fossil genus Eopalpomyitis Hong et al., 2000 (Hong 1981, 2002). It is worth mentioning that Sinopogonites eocenicus Hong, 2002 is an invalid name because it was proposed for a biting midge after 1999 without a specified type depository (Evenhuis, 2014).

The purpose of this work is to describe three new species of biting midges from Fushun amber, to provide keys to fossil species of the genera Mantohelea and Gedanohelea and to discuss biogeographic implications as well as the relevance of Fushun amber inclusions for age determination of Baltic amber.

Amber specimens are deposited at the Nanjing Institute of Geology and Palaeontology (NIGP), Chinese Academy of Sciences, Nanjing, China. Samples have been ground and polished to pieces of the minimum size possible using a Buehler Phoenix Beta grinding machine.

For generic identification, the determination key of Szadziewski (1988) was used. The tribal placement of both genera expanded in the current paper follows that of Borkent (2016). 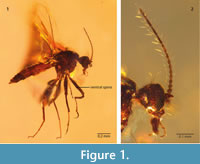 Etymology. The specific epithet is derived from Latin name of China - Sina. 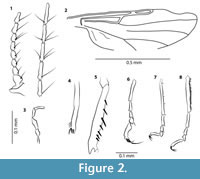 Remarks. The species resembles Mantohelea gedanica in the proportions of palpal segments 4 and 3 and in the absence of spine-like setae on the hind femur. Both species differ however in the fore femur, which is less swollen in Mantohelea sinica (Table 1). 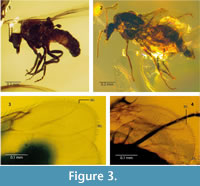 Etymology. The specific epithet refers to the city of Fushun near where the amber is collected.

Diagnosis. The species is characteristic in having cylindrical palpal segments 3 and 4 and wing veins M1 and M2 strongly divergent. Males unknown. 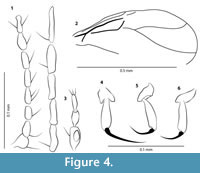 Etymology. The specific epithet refers to the province of Liaoning, from where the amber is collected. 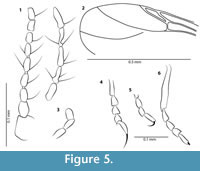 Having tarsomere 5 of foreleg distinctly shorter than combined length of tarsomeres 2-4, and the claw of foreleg almost as long as tarsomere 5 Gedanohelea liaoningensis and G. fushunensis resemble the Baltic amber species G. loewi. The species differ from each other in the shape of palpal segment 3, which is almost spherical and bearing a small round sensory pit in Gedanohelea loewi but cylindrical in the two Fushun amber species and with a broad oval sensory pit in G. fushunensis. Furthermore, in G. fushunensis vein M1 meets the wing margin exactly at 90o instead of an acute angle as in G. loewi.

Specimens studied in the present work are partially distorted and dark brown to black in colour, which is characteristic for Fushun amber inclusions and most probably caused by heating of the amber during diagenesis (Wang et al., 2014). The two fossil genera Mantohelea and Gedanohelea recorded here from Fushun amber have previously been known only from two and three species, respectively, from Baltic amber (Szadziewski, 1988; Szadziewski et al., 2007) and confirm recently reported faunal affinities between both deposits (Wang et al., 2014). Our findings imply that these genera had a broader distribution in the Eocene than so far known, covering Europe and north-eastern Asia. The Euro-Asian landmass (Europe and Asia) was divided from the Cretaceous to the early Paleogene by the epicontinental Turgai Strait (Figure 6) resulting in low intercontinental dispersal rates of non-marine taxa, including insects, between the eastern and western lands, which increased only after the closing of the Turgai Strait at about 30 Ma (Rögl, 1999; Sanmartin et al., 2001). Even so, distribution patterns of Mantohelea and Gedanohelea imply that faunal exchange between the eastern and western margins of the Eurasian landmass occurred during the Eocene, probably either by trans-oceanic dispersal or via temporary land bridge connections caused by sea level falls (Iakovleva et al., 2001). The latter scenario is supported by land vertebrate dispersal (Godinot and Lapparent de Broin, 2003; Smith et al., 2006). Fushun amber contains the first insect indicators that the Turgai region allowed dispersal, and further studies are likely to keep revealing even more evidence.

Detailed studies of Fushun amber inclusions also are of relevance for age determination of Baltic amber, which still is matter of debate. Difficulties in age determination are due to repeatedly re-deposition of the amber, the broad range of the ancient forest and its existence for probably several million years. Palynological studies date the Prussian Formation of Baltic amber as upper Eocene in age (ca. 39-33.9 Ma) (Aleksandrova and Zaporozhets, 2008) whereas absolute radiometric dating analyses of glauconites suggest a lower to middle Eocene age (48.5-43 Ma) for this formation (Ritzkowski, 1997).

Further evidence for a middle Eocene age of Baltic amber comes from correlations with limnic sediments within Eckfeld maar, which are dated 44.3 ± 0.4 Ma (Mertz et al., 2000) and contain insect groups that are otherwise known only from the geographically near Baltic amber (Wappler, 2003; Wappler and Engel, 2003; Wappler and Andersen, 2004).

Further contribution to the controversial discussion about the age of the amber deposits from the Baltic region is now provided by Fushun Ceratopogonidae whose close relationships to Baltic amber species imply a lower Eocene age for the Baltic amber. Considering that the amber forests in the Baltic region persisted for several million years, up to the end of the Eocene (e.g., Weitschat and Wichard, 2010), this finding does not contradict the faunal similarities between Baltic amber and the Eckfeld maar. Nevertheless, further studies on insect taxa from Fushun amber as well as other contemporaneous European and Asian ambers, such as Oise amber from France and Cambay amber from India, are needed to confirm our conclusions.

Godinot, M. and de Lapparent de Broin, F. 2003. Arguments for a mammalian and reptilian dispersal from Asia to Europe during the Paleocene-Eocene boundary interval. Deinsea, 10:255-275.

Sanmartin, I., Enghoff, H., and Ronquist, F. 2001. Patterns of animal dispersal, vicariance and diversification in the Holarctic. Biological Journal of the Linnean Society, 73:345-390.