​A full account of 67 ditch cutting samples collected from Well 5, OML 34 in the Niger Delta at depth intervals between 2441m to 3650m is presented. Lithologic description of the samples shows seven lithostratigraphic units composed of shale, siltstone and sandstone corresponding to the Paralic Agbada Formation. Foraminifera analysis was carried out on these samples, a total of 51 species were recovered; 37 benthonic and 14 planktonic. The planktonic index recovered from the well, Praeorbulina glomerosa, Praeorbulina sicana, Orbulina saturalis, and Catapsydrax dissimilis, revealed that the age of the penetrated well is Miocene. Three planktonic foraminifera zones corresponding to Blow, 1969 (N6 - N7, N8 - N9 and N9) and Berggren et al., 1995 (M4, M4 - M5, and M5) zones are proposed for the well. The planktonic zones are Catapsydrax dissimilis Partial-range zone, Praeorbulina glomerosa Interval zone, and Orbulina universa Taxon - range zone, respectively. Sediments of the well are considered to be of normal marine depositional environment based on shell type ratio and triangular plot of the foraminifera test type (arenaceous, porcelaneous and hyaline). The paleobathymetry of the well ranges from non-marine to middle neritic environment based on foraminifera distribution.

Copyright: October 2017 Palaeontology Association.
This is an open access article distributed under the terms of Attribution-NonCommercial-ShareAlike 4.0 International (CC BY-NC-SA 4.0), which permits users to copy and redistribute the material in any medium or format, provided it is not used for commercial purposes and the original author and source are credited, with indications if any changes are made.
creativecommons.org/licenses/by-nc-sa/4.0/creativecommons.org/licenses/by-nc-sa/4.0/

According to Evamy et al. (1978) and Reijers et al. (1997), the petroleum industry in Nigeria have described and adopted informal biostratigraphic zonations, which are largely unpublished. This lack of formal biostratigraphic zonations for the Niger Delta still persists even though foraminifera biostratigraphy of several wells from the Niger Delta have been extensively published (Petters, 1979, 1982, 1983; Adeniran, 1997; Ozumba and Amajor, 1999; Oluwatosin, 2010; Okosun et al., 2012; Obiosio, 2013; Oloto and Promise, 2014), however, the foraminiferal biostratigraphy of Well 5 OML 34 has not been documented. 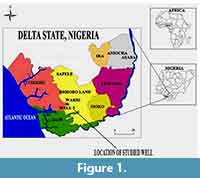 Attempts to mutually validate and integrate the Shell Petroleum Development Company (SPDC) framework of Evamy et al. (1978) with published and unpublished works of other industry groups is hampered by the use of different alphanumerical coding systems for the foraminifera systematics. However, Reijers et al. (1997) reported that there have been concerted efforts within the scope of the stratigraphic committee of the Niger Delta (STRATCOM), to produce a generally acceptable delta-wide biostratigraphic framework, but not much has been accomplished after several data gathering exercises by the committee.

This study carried out a detailed biostratigraphic description of Well 5 OML 34, (Figure 1) in order to propose biozones and paleoenvironments for the well.

Geology of the Niger Delta

The Niger Delta is an oil province of Nigeria located on the West African Continental margin. The Niger Delta basin lies between latitude 4°00'00"N and 6°00'00"N and longitude 5°00'00"E and 8°00'00"E. It is bounded to the west and northwest by the Western African shield, which terminates at the Benin hinge line and to the east, by the Calabar hinge line. The Anambra basin and Abakaliki anticlinorium mark its northern limit. To the south, it is bounded by the Gulf of Guinea. The Niger Delta is a large arcuate delta of the destructive, wave-dominated type and is composed of an overall regressive clastic sequence, which reaches a maximum thickness of about 12 km in the basin centre. The shape and internal structure of the Niger Delta are controlled by fracture zones along the oceanic crust, such as the Charcot fracture zone, Chain fracture zone, and the Romanche fracture zone (Corredor et al., 2005).

Biostratigraphic analysis was carried out on 67 ditch cutting samples obtained from Well 5, OML 34, Niger Delta. Samples were collected at 18m (60ft) interval with a total thickness of 1200 m. The procedure of analysis is as follows:

Biostratigraphic data yielded biofacies information for paleoenvironment and bathymetry. Dating of the key surfaces where possible was achieved by their calibration to the third order cycles of Haq et al. (1988).

Photomicrographs of foraminifera recovered from the studied well were taken using a Celestron 5 mp digital camera, mounted on a binocular microscope. 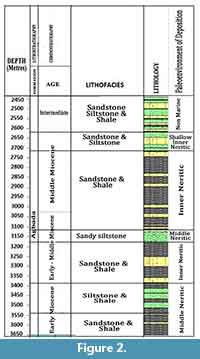 The lithology (Figure 2) shows siltstone layers with the alternation of sandstone and shale, the shale is brown to grey, occasionally black to brown, moderately hard. The sandstone is fine-grained (occasionally coarse-grained), sub-angular to sub-rounded, well sorted and occasionally ferruginized. Figure 2 shows an alternation of sandstone with shale, suggesting that the studied well interval (2441 - 3650 m) penetrated the Agbada Formation of the Niger Delta. In general, it has been observed that the upper part of the formation has a higher sandstone percentage than the lower part, suggesting progressive, seaward advancement of the Niger delta through geological time.

The following index forms were identified: Praeorbulina glomerosa, Praeorbulina sicana, Orbulina saturalis, and Catapsydrax dissimilis. Based on the presence of these index forms, as defined by Bolli and Saunders (1985) and Petters (1983), the age of the studied well ranges from Early Miocene to Middle Miocene.

Middle Miocene. The upper limit of the Middle Miocene is indeterminate in the sequence studied because of the absence of marker species, the lower limit, however, is marked at 3027 m based on the last downhole occurrence (LDO) of Orbulina universa. Other planktonic forms present include Praeorbulina sicana, Globigerina sp., Globigerina venezuelana, and Globorotalia mayeri. 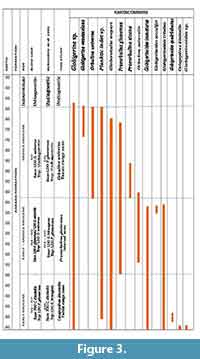 Three zones have been proposed in this study, based on the International stratigraphic guide of Hedberg (1976) and the observation of the ranges of planktonic foraminifera (Figure 3) as follows: Catapsydrax dissimilis partial-range zone, Praeorbulina glomerosa interval zone and Orbulina universa taxon-range zone.

The zone is defined by the first downhole occurrence (FDO) of Catapsydrax dissimilis and Globigerinoides sp. at the base and the last downhole occurrence (LDO) of Praeorbulina glomerosa at the top (Figure 3). Other planktonic forms occurring within the zone are Globigerinoides sp. Globigerinoides quadrilobatus, Planktic indet sp. and Globorotalia mayeri. This zone is equivalent to M4 zone of Berggren et al. (1995) and the N6 - N7 zone of Blow (1969). The FDO of Catapsydrax dissimilis marks the M4 and N6/N7 boundaries of Berggren et al. (1995) and Blow (1969), respectively. Catapsydrax dissimilis is continuously present in the Early Miocene. The age of this zone is Early Miocene based on the presence of planktonic index forms.

The planktonic foraminiferal preservation in the upper intervals of the well is poor. Stratigraphically important taxa (planktonic index forms) were not identifiable, therefore the undiagnosed stratigraphic interval above the Orbulina universa taxon - range zone is assumed to be M6 zone of Berggren et al (1995) and N9/N10 zone of Blow (1969), because of the stratigraphic position above the positively identified zone (Orbulina universa taxon - range zone). The age is assumed to be Middle Miocene for the same reason.

Following the same principles as Bandy (1964), Funnel (1967), Boersma (1978), and Brasier (1980), the paleodepositional environment of the studied well was established based on the information interpreted from the evaluation of the benthonic foraminifera assemblages. This has been integrated with the lithologic description of the well and the planktonic/benthonic foraminifera ratio.

Foraminifera data was most useful in the estimation of paleobathymetry, it involved the use of relative abundance and diversity of the foraminifera encountered as well as the occurrence of environmentally significant taxa. It is on these bases that the sediments of the well were interpreted to have fluctuated from non-marine to middle neritic as follows:

The well interval possessed characteristics that are exhibited by the above environments.

Non marine environment (Figure 4). This inference is based on the following reasons: 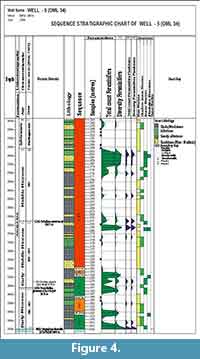 The intervals are completely barren of foraminifera. The complete absence of fauna in this interval suggest a littoral (shore or coastal) settings.

Shallow inner neritic environment (Figure 4). This inference is based on the following reasons:

Inner neritic environment (Figure 4). This inference is based on the following criteria:

Inner to middle neritic environment. This environment of the studied well (Figure 4) is inferred based on the following:

According to Okosun et al. (2012), the inner to middle neritic environment is characterized by the occurrence of the typical forms from inner, middle, and outer neritic environments like Uvigerina sp, Spiroplectamina wrightii, and Hanzawaia strattoni.

Middle neritic environment. This environment (Figure 4) is inferred based on the following characteristics:

This environment is recognized by the presence of indicator fauna like, Lenticulina inornata, and Heterolepa pseudougerina. Increase in the number of planktonic specimens. The average planktonic/benthonic ratio is high, the sample species diversity is also increased and the lithology of the middle neritic environment is composed of shale and silt (Okosun et al., 2012).

Based on the paleoenvironmental interpretation provided above, it can be inferred that the paleobathymetry of the study well ranges from shallow to inner shelf environment. 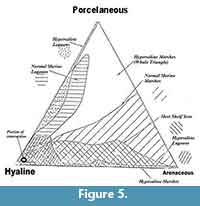 Foraminifera live in all marine environments from the deepest ocean floor to the intertidal salt marshes found behind barrier islands or around the margins of estuaries.

Paleosalinity interpretations for the studied well were made based on Shell-type (morphogroup) ratio triangular plot (Figure 5). The proportion of the three shell type (agglutinated, hyaline, and porcelaneous; Figure 6) of foraminifera in a sample can be used to characterize a particular environment in seas and oceans. 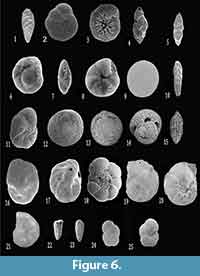 The dominance of the calcareous benthonics (FOBC) with over 60% of total forms present suggests an open marine condition (Nagy et al., 1988).

According to Murray (1991) and Sen Gupta (1999), the high diversity and dominance of calcareous taxa suggests transition from brackish marginal marine habitats to open neritic conditions.

Based on the lithology and foraminifera recovered from the well, it is inferred that the well penetrated the Agbada Formation and is of Miocene age (Early and Middle Miocene).

Three planktonic foraminifera zones: Catapsydrax dissimilis Partial-range zone, Praeorbulina glomerosa Interval zone, and Orbulina universa Taxon - range zone corresponding to Berggren et al. 1995 (M4, M4 - M5, and M5) and Blow 1969 (N6 - N7, N8 - N9 and N9) zones, respectively, have been proposed for the well. It is hoped that the three biozones proposed in this study will contribute to the findings of the stratigraphic committee of the Niger Delta (STRATCOM), to produce a generally acceptable delta-wide biostratigraphic framework.

Further study of data sets from adjoining wells in the region will help in proper correlation of the zones, boundaries, and depositional environment in the study area.

The authors wish to acknowledge Shell Petroleum Development Company of Nigeria (SPDC) for providing ditch cutting samples used in this study. We also acknowledge the reviewers who took time to review and make amendments to improve this paper.