This research reinforces the poorly documented Cretaceous record of the aspidorhynchid fish Belonostomus found in the North American Gulf Coastal Plain. This unique fish has gone mostly unnoticed in fossil collections due to the heightened diversity and popularity of other Cretaceous teleosts. Six new specimens are documented from various fossil sites in Texas, Mississippi, and Alabama. Most of these fossil localities have not produced aspidorhynchid material until now and help bridge the gap in records between the Lower and Upper Cretaceous stratigraphic records of the North American continent. The inclusion of these new Belonostomus records also helps to further our understanding of this enigmatic fish.

Copyright: September 2019 Paleontological Society.
This is an open access article distributed under the terms of Attribution-NonCommercial-ShareAlike 4.0 International (CC BY-NC-SA 4.0), which permits users to copy and redistribute the material in any medium or format, provided it is not used for commercial purposes and the original author and source are credited, with indications if any changes are made.
creativecommons.org/licenses/by-nc-sa/4.0/

Belonostomus is an apidorhynchyid teleosteomorph fish found within marine paleocommunities of the late Mesozoic (Arratia, 2001). It is a small fish, measuring 31 cm on average (Brito, 1994; Ebert, 2014). This aspidorhynchid fish most likely consumed planktonics or other small fish (Wainwright and Barton, 1995; Cavin, 2002; Friedman, 2009; Kogan and Licht, 2013) and were probably a prey item for larger fishes and marine reptiles that commonly accompany the remains at fossil localities.

The Aspidorhynchidae consist of the genera Aspidorhynchus, Belonostomus, Vinctifer, Richmondichthys, Pseudovinctifer, and Jonoichthys (Brito, 1997; Arratia, 2001; 2013; Gouiric-Cavalli, 2015; Nelson et al 2016; Cantalice et al., 2018). A seventh genus, Diphyodus (Lambe, 1902) is synonymous with Belonostomus (Estes, 1964). Aspidorhynchidae are related to the Pachycormiformes (Lopez-Arbarello and Sferco, 2018). The stratigraphic range of the genus is well documented. The earliest record for Belonostomus is the type specimen, B. tenuirostris (Agassiz, 1833), which was derived from the Late Jurassic (Tithonian) at the Solnhofen Lagerstätten in Europe. The last occurance of Belonostomus extends until shortly after the K-Pg extinction event in the Late Paleocene (Tiffian) in North America, possibly due to a large shift in the paleoenvironments during the regression of the Western Interior Seaway (Bryant, 1987; Brito, 1997; Ebert, 2014). Six new occurrences of Belonostomus are reported from the North American Gulf Coastal Plain. The inclusion of these new specimens helps further document the biogeographic and biostratigraphic range of Belonostomus in North America. 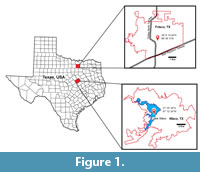 The fossils described in this study, including those collected by the first author in Texas (Figure 1), were collected as float and then placed in the local, publicly accessible collections listed below. The first author and third authors prepared the specimens for study using a small steel pin to clean excess matrix from the elements and made repairs to the broken segments using super glue adhesive. The North American map (Figure 2) and stratigraphic placement (Figure 3) were compiled using Scott et al. (2003) and observations by the authors. We follow Arratia (2001) for higher-level taxonomic rankings for the fossils. 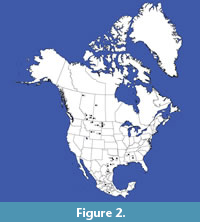 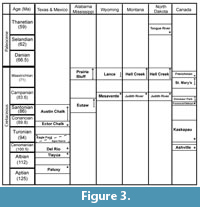 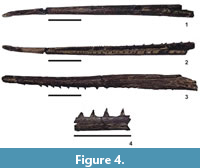 Description. The left and right premaxillae are slender bones that fuse, forming a ventral V-shaped trough. A thin bone that could be the vomer is preserved in the trough (Estes, 1964). Together, the premaxillae measure 179.80 mm in length. It closely resembles UTBEG 31051-39 and Belonostomus longirostris (Woodward, 1894; Bardack, 1968; Estes, 1964). The teeth on the specimen are small, slightly recurved, and increase in size posteriorly.

Description. The partially preserved predentary measures 46 mm and resembles FHSM VP 17431 (Everhart, 2009). The left and right dentaries are fused and form a predentary symphysis, which articulates with the predentary. In ventral aspect, the symphysis sits within a small recess, and the two dentaries interdigitate to form a crosshatched pattern with small bulbous ridges. This may be a new feature for Belonostomus. The teeth are consistent to descriptions found in Woodward (1894) and Estes (1964) and other specimens discussed in this report.

Description. Measures 54.5 mm from anterior-most point to the base. In cross section the element looks like an inverted “U” with both sides fused medially, the fusion is mostly obscured by matrix. The overall morphology closely resembles Belonostomus longirostris (Brito and Suarez, 2003). In ventral view, the teeth are closely spaced and are situated within a canal with a thin layer of bone, which covers at least one half of each tooth. Most of the teeth were not preserved.

Description. Measures 4.1 mm in greatest anteroposterior length and has a greatest width of 3 mm at its posterior end. Neither the anterior or posterior ends of ALMNH 1994.24.15 are preserved. In dorsal view, this premaxilla has straight lateral edges that have a slight medial taper anteriorly. The element is ornamented with a series of strong parallel striations that extend the length of the premaxilla and cover the dorsal and lateral edges. These striations occasionally intersect along the dorsal margin. In ventral view, a shallow sulcus extends medially along the entire length of the premaxilla. This sulcus is V-shaped in posterior view, and it becomes gradually shallower towards the anterior end. Positioned on each lateral side of this sulcus is a single row of minute, tightly packed, alveoli (Figure 7.3). No teeth are preserved on this specimen, but the tooth rows extend the entire length of the element.

Description. The specimen represents the rostrum and premaxillae that are fused with no sutures to mark the boundaries between the elements. The specimen measures 176 mm long with the posterior 31 mm of the element possessing teeth. Ventrally, a suture marks the boundary between the left and right premaxilla. Each premaxilla has a single, large tooth positioned medially within a deep ventral excavation. Rows of smaller teeth reside on a ridge that flanks the medial tooth. Overall, the architecture of the teeth and premaxilla is similar to the other specimens and still consistent with most Belonostomus species except for B. helgandicus and “Belonostomus sp. 3” (Brito. 1997). Small teeth are present between the gaps where larger teeth would have been and disappear at least one-third from the anterior tip of the element. 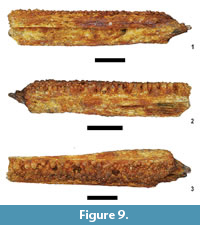 Description. The element measures 21 mm in greatest anteroposterior length, and nearly 4 mm in greatest labiolingual thickness. The oral surface of the dentary is covered with a dense tooth patch of irregularly placed sub-circular teeth of various diameters. The crown on the individual teeth is rounded and lacks a distinct cusp. A pronounced ridge extends medially across the length of the labial and lingual faces of the dentary. The ventral face is composed of a thin crest that also extends the length of the element and forms a distinct T-shaped outline in profile view.

Fossils that have been identified as Belonostomus have been collected from various units that range from the Albian to the Maastrichtian in the North American Gulf Coastal Plain (Figure 2, Figure 3).

Mexico–Belonostomus specimens are reported mainly from Lower Cretaceous formations. Belonostomus ornatus was the first member of the genus described in Mexico. It was recovered from the Lower Cretaceous Berriasian (Sabinal Formation?) rocks of Cerro de la Virgen, Tlaxiaco in Oaxaca State (Felix, 1891; Russell, 1988) (Figure 3). Vinctifer sp. and Belonostomus sp. specimens have been recovered from the late Albian Tlayúa Formation at the Tlayúa quarry which is located in the state of Puebla (Espinosa-Arrubarrena and Alvarado-Ortega, 2010) (Figure 2, Figure 3). The youngest record of Belonostomus sp. in Mexico comes from the Vallecillos quarry of the Lower Turonian Agua Nueva Formation (Giersch et al., 2010).

Texas, USA–The occurrence of Belonostomus ranges from the Upper Aptian to the end of the Santonian. Bardack (1968) reported on UTBEG 31051-49 and TMM 40092-23, both from the Austin Chalk (Coniacian to early Campanian). Thurmond (1974) then reported on SMU 62133 from the Lower Cretaceous Paluxy Formation in Mills County, near the city of Priddy. The specimens SMU 77675, SMU 77676, and SMU 77677 fill in some of the gaps of the state. The authors are unaware of any Belonostomus collected elsewhere in the state.

Mississippi, USA–The robust aspidorhynchiform rostrum, MMNS 3152, was found in the Upper Cretaceous (Maastrichtian) Prairie Bluff Chalk in Oktibbeha County (Figure 2, Figure 3). It appears morphologically similar to both SMU 77675 and SMU 77676, but is much larger in size. This specimen, suggested to be Belonostomus, would be the youngest occurrence of the genus in the Gulf Coastal Plain and is the largest specimens reported in the area (Figure 2, Figure 3).

Alabama, USA–Whetstone (1978), and later Schultze et al. (1982) and Russell (1988), reported the first Belonostomus specimen from Alabama, KUVP 36120. Collected from the Tombigbee Sand Member of the Eutaw Formation at site AMg-2 in Montgomery County, this specimen was originally reported to be Campanian in age (Figure 2, Figure 3). However, later investigations of this unit showed that the exposed Tombigbee Sand at site AMg-2 instead falls within the upper Santonian (Puckett, 2005; Prieto-Marquez et al., 2016). Two additional specimens were later collected from the same unit and locality, ALMNH 1994.24.15 and ALMNH VP 1994.31.112, the former being first reported by Schein and Lewis (2007).

Belonostomus and aspidorhynchiform specimens have also been reported in North American localities outside of the Gulf Coastal Plain and range between the Lower Cretaceous to lower Paleocene (Figure 2, Figure 3). These include the Ashville, Kaskapau, Dinosaur Park, St. Marys, and Milk River formations in Canada; Judith River and Hell Creek Formations in Montana; Tongue River Formation in North Dakota; Mesa Verde and Lance formations in Wyoming and possibly the Kiowa and Niobrara formations in Kansas (Fox, 1984; Bryant, 1987; Russell, 1988; Ping et al., 2001; Pearson et al., 2002; DeMar and Breithaupt, 2006; Shimada and Fielitz, 2006; Everhart, 2009; Murray and Cook, 2016; Brinkman et al., 2017). The inclusion of the six new specimens reported here adds to the stratigraphic and paleobiogeographic records of Belonostomus in North America.

Due to the large biogeographic and stratigraphic range for the genus, the authors propose that the Gulf Coastal specimens could represent a different species than Belonostomus ‘longirostris’, which is commonly used in the literature and different than the unnamed aspidorhynchiform specimen, FHSM VP 17431 from Kansas. This could be explained by vicariance, which is consistent with most known dispersals of bony fishes (Heads, 2005; Cavin, 2008). However, naming a new species is not the focus of this project and will be left as a future contribution.

The authors would like to express gratitude toward the following people who helped develop this project into publication. B. Durr, W. Kirpach, and R. Morin who were instrumental for allowing the authors to work on their collected specimens and bring light to the new data. Thanks to D. Winkler (SMU), J.C. Sagebiel (TMM), D.J. Ehret (NJSM), G. Phillips (MMNS), and D. Miao (KU) for granting access to the collections housed in their respective institutions. M. Friedman (UofM), J-P. Hodnett (M-NCPPC), G. Arratia (KU), and the anonymous reviewers for insightful commentary dealing with this project.

Ebert, M. 2014. The genus Belonostomus Agassiz, 1834 (Neopterygii, Aspidorhynchiformes) in the Late Jurassic of the Solnhofen Archipelago, with a focus on Belonostomus kochii Münster, 1836 from Ettling (Germany). Archaeopteryx, 32:15-43.

Shimada, K. and Fielitz, C. 2006. Annotated Checklist of fossil fishes from the Smoky Hill Chalk of the Niobrara Chalk (Upper Cretaceous) in Kansas. Bulletin of the New Mexico Museum of Natural History, 35:193-213.