Fossil insects are usually not found in marine outcrops, with the exceptions of the rich outcrops of Early Jurassic of Northern Europe, Late Jurassic of Germany, and Early Paleogene of Denmark. In these deposits, the occurrence of fossil insects is seemingly related to near-shore, frequently lagoonal paleoenvironments. We report the unusual finding of a bibionid fly from the Early Miocene Upper Marine Molasse of Zillerleite (Bavaria, Germany), which represents the first fossil insect known from this outcrop. It belongs to the genus Penthetria and is among the rare examples of fossil insects recorded from deep-water marine deposits.

Copyright: November 2017 Paleontology Society.This is an open access article distributed under the terms of Attribution-NonCommercial-ShareAlike 4.0 International (CC BY-NC-SA 4.0), which permits users to copy and redistribute the material in any medium or format, provided it is not used for commercial purposes and the original author and source are credited, with indications if any changes are made.
creativecommons.org/licenses/by-nc-sa/4.0/

Fossil insectiferous outcrops of marine origin are not very frequent, with the notable exceptions of the rich entomofaunas of the Early Jurassic of Northern Europe (Ansorge, 1996; Hermoso et al., 2014), the Late Jurassic of Germany and France (Nel et al., 2014), and the Early Paleogene of Denmark (Rust, 1998), among others. These relatively rich outcrops correspond to shallow water, frequently lagoonal paleoenvironments. Sediments of pelagic origin, however, normally do not contain fossil insects, with few exceptions, viz. a Miocene beetle fossilized with a deep water fish in Crimea (Zherikhin, 2002), a beetle elytron found in flysch sediments produced in the lower bathyal to abyssal zone of Moravia (Prokop et al., 2004), an Heteroptera found in Miocene bathyal sediments in Slovakia (Vršanský et al., 2015), and an Orthoptera found in deep oceanic outcrop of the Oligocene of Iran (Ataabadi et al., 2017). Pierce (1965) indicated the presence of insects in modern sea sediments collected at a depth of 600 m. Anderson et al. (1990) indicated the presence of six insect families in marine Holocene sediments. We report the unusual finding of a bibionid fly from the Early Miocene Upper Marine Molasse of Zillerleite/Traunstein in Bavaria, Germany, which represents the first fossil insect known from this outcrop. The taxonomic placement of the fossil and the occurrence of fossil insects in marine outcrops are briefly discussed.

The outcrop (GPS N47°51.05’ E12°38.43’) is located beside a forest track south of Traunstein (Bavaria, Germany) at the bottom of a slope called Zillerleite (see excursion D1b, Hagn et al., 1981). The described insect was found together with some fish remains, mostly isolated scales, by manually splitting of the exposed shales. The river Traun valley is well known for its section of the unfolded molasse of the North Alpine Foreland Basin ranging from early Oligocene to early Miocene. The fish shales of Zillerleite (Traunstein), deposited in the Paratethys sea between the Alps in the south and the Bohemian High in the north, are found in the northern part of this section. Recently, a number of microfossils have been studied (e.g., Hagn et al., 1981; Wenger, 1985, 1987). Based on nanno-plankton, Martini (1981) considered that they correspond to the zone NN1, matching with Wenger (1985, 1987) who dated these strata as Upper Egerian (corresponding to Aquitanian in terms of international chronostratigraphy). Due to the presence of myctophid fishes (with luminescent organs) and the micropalaeontological results (Weng, 1985, 1987), a deep-water environment with decreasing depth towards the transition to the succeeding Eggenburgian sediments can be expected (see also Steininger and Wessely, 2000). 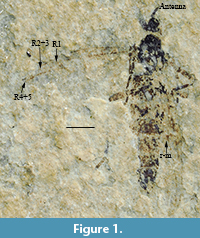 Age and locality. Aquitanian, 23.13-22.82 Ma (Grunert et al., 2015), Egerian, Zillerleite, Bavaria, Germany. A new location of fossiliferous fish shales close to the classical outcrop at the Zillerleite creek was sampled on 2 Sep 2016 by one of us (BB).

Comments. The specimen can be placed in Bibionidae based on the general shape of the body with long legs and slightly clavate femora and based on the typical forewing venation. Placement in the genus Penthetria is supported by the branched radial sector, slender legs, and elongate vein R2+3 running straight and obliquely parallel to R4+5. It is clearly a female because of the small and well-separated eyes and broad abdomen.

Fossil bibionid flies of the genus Penthetria have been more frequently found in Oligocene deposits than in Neogene deposits, possibly due to the continuous cooling of the climate in Europe during the Miocene (Collomb et al., 2008). Skartveit and Nel (2016) recorded seven species of Penthetria from French Oligocene deposits, and additional species of the genus that need revision, were described from the Oligocene of Germany (Statz, 1943; Wedmann, 1998). The described Miocene Penthetria species are numerous (no less than 11 species according to Evenhuis, 1994), but they were not the subject of a recent taxonomic revision. Many of these species names will probably turn out to be synonyms. The body and wing dimensions of the fossil described in this paper ranges within the sizes of these flies, especially of P. jucunda (Heer, 1849), P. latipennis (Heer, 1849), P. longa (Heer, 1849), P. lygaeoides (Heer, 1849) (all from the Miocene of Oeningen), and P. fuchsi Handlirsch, 1907 (Greece). All of these species have forewing lengths between 9.5 and 11.5 mm (Heer, 1849; Bachmayer et al., 1971; Skartveit and Pika, 2014). It is not possible to accurately compare the new specimen with the taxa that need revision, and we therefore avoid naming it at this stage.

It is remarkable to find a delicate bibionid fly specimen in deep marine sediments. Bibionidae have also been recorded from the shallow marine sediments of Denmark (Rust, 1999). Fossil insects in marine sediments are maybe more common than currently appreciated. New findings like the one presented in this paper may lead geologists and paleontologists to put more efforts in tracing insect fossils. These findings are scientifically relevant as they contribute to a better understanding of ancient paleoenvironments and can even give direct evidence of biological events such as insect migrations (e.g., Rust, 2000; Ataabadi et al., 2017).

We sincerely thank two anonymous referees for the comments on the first version of the paper.

Merz, B., and Haenni, J.-P. 2000. Morphology and terminology of adult Diptera (other than terminalia). p. 21-51. In Papp, L. and Darvas, B. (eds.), Contributions to a Manual of Palaearctic Diptera (with special reference to flies of economic importance). Vol. 1. General and Applied Dipterology. Science Herald, Budapest.

Steininger, F.F. and Wessely, G. 2000. From the Tethyan Ocean to the Paratethys Sea: Oligocene to Neogene stratigraphy, paleogeography and paleobiogeography of the circum-Mediterranean region and the Oligocene to Neogene Basin evolution in Austria. Mitteilungen Österreichische Geologische Gesellschaft, 92:95-116.